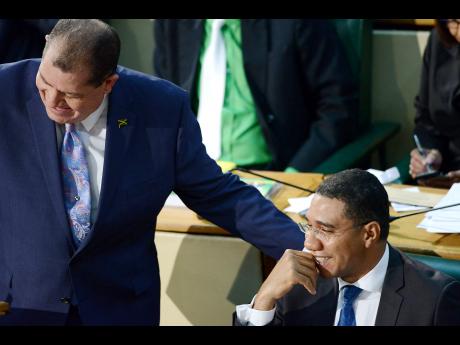 Minister of Finance and Public Service Audley Shaw yesterday presented data suggesting that Jamaica's export bill to Trinidad and Tobago has, for the first quarter of 2016, amounted to a paltry 1.3 per cent of what it imports from the country.

"The most stark contrast which reveals the decline in Jamaica's productivity and export competitiveness is dramatically highlighted in the recent trade figures January 1 - April 30 of this year 2016, between Jamaica and Trinidad and Tobago," Shaw said as he opened the Budget Debate in the House of Representatives.

The finance minister said the figures show that while Jamaica imported in the region of J$13.4 billion from Trinidad and Tobago, the island only exported J$178.9 million over the same period.

Asserting that this represented a mere 1.36 per cent of the twin island republic's exports to Jamaica, Shaw disclosed that the data was unearthed from real time information yielded through Jamaica Custom's new Automated System for Customs Data (ASYCUDA).

Shaw suggested that, not unrelated to the FINSAC crisis, a prime example of Jamaica's lack of growth is its regional trading experience.

"Apart from the J$23 million of real exports, we have only exported so - air in these empty tanks," he said. "This paints a picture of the seriousness of our situation, which must be addressed."

Added Shaw: "It is important that I clearly demonstrate the consequences of such low rates of growth over long periods.

He noted that it was Albert Einstein who once called 'compounding' the most powerful force in the universe.

"For example, if Jamaica had kept just a three per cent average growth rate over the last 25 years, our per capita GDP would be double our present per capita GDP," he said.

Shaw added: "In other words, we can become twice as wealthy as we presently are if we commit and really achieve the five per cent average over the next three election cycles."

Shaw stressed that it was the firm belief of the Government that economic growth would not come from remedial austerity programmes.

He stressed that it would be the result of a comprehensive and coordinated set of policies that facilitate and encourage private sector-led growth.

Shaw noted that, in 1989, Jamaica ran a balanced trade account with CARICOM, including Trinidad and Tobago.

"We purchased as many goods as we sold in the CARICOM market," he said.