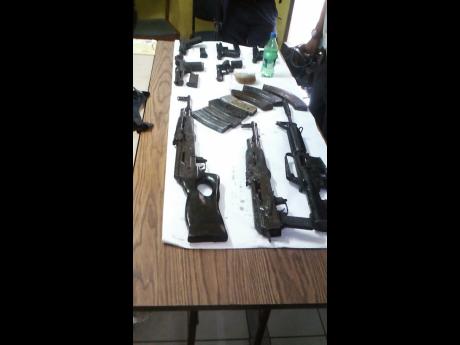 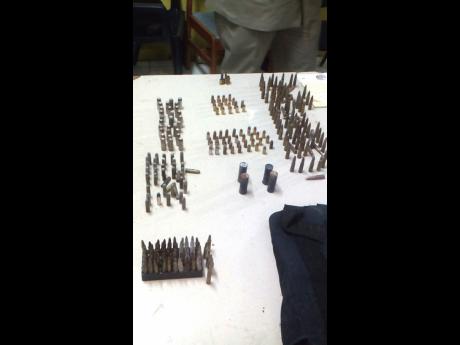 A predawn operation yesterday by the security forces in McCooks Pen, Spanish Town, netted a number of high-powered weapons, small arms, and more than 200 rounds of ammunition.

In what has been described as an intelligence-driven operation, Senior Superintendent of Police in charge of St Catherine North, Anthony Powell, disclosed that nine men were picked up for questioning in relation to the arms find. He said that two of the men would be charged soon.

"This operation was launched as a result of some gang investigations that we would have been carrying out over many months," Powell said, adding that, "This find will certainly put a dent in the operations of some of the criminal gangs operating in and around Spanish Town."

The senior cop called on residents to play their part in helping the police to root out gang-related activities in their communities.

"We are calling on the public to keep us informed about gang-related activities. These are the weapons they have out there and they won't use it on themselves. They will use it against law-abiding citizens," Powell stated.

According to Powell, eighteen 9mm rounds and two assorted rounds, along with the .357 Magnum were found in a dwelling occupied by the two men who are expected to be charged.

Yesterday's arms find comes against the background of reports of heightened tension between rival gang members in Spanish Town.

In a Gleaner article on Thursday, Senior Superintendent of Police Clifford Chambers, who is in charge of the Counter Terrorism and Organised Crime Investigation Branch, said the tension was due to efforts by reputed Clansman leader Tesha Miller to regain control of the area since he returned to the island two months ago.

The police believe that members of the Clansman gang might be trying to garner support from factions of the One Order gang to regain power for Miller.