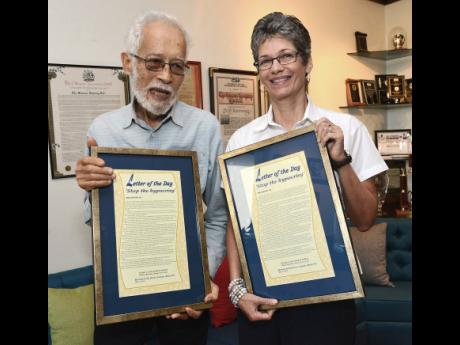 Ian Allen
Horace Levy of the Peace Management Initiative and Diana McCaulay of the Jamaica Environment Trust show off their plaques for winning the Silver Pen Award for February.

Diana McCaulay and Horace Levy's joint letter to the editor, headlined 'Stop the hypocrisy' and published on February 10, has won them both the Silver Pen Award for that month.

McCaulay and Levy penned the letter to outline their concern that Jamaica's environmental laws are usually ignored by the Government, and that the environment is almost always sacrificed for economic gain.

Former Minister of Water, Land, Environment and Climate Change Robert Pickersgill, in 2015, they said, declared it was Government's position that the economy of the country is more important than any matters involving the environment.

This, McCaulay said, was what she needed to hear because the Government had always pretended the environment was a matter of significance by upholding and maintaining bodies such as the National Environment and Planning Agency (NEPA).

"I was relieved because I thought it was the truth, and we were finally hearing the truth. Mr Pickersgill is no longer the minister of environment and it remains to be seen what the position is going to be of the new administration, considering we have the identical situation in Negril as it happens with the Royalton hotel, which has been in breach of its permits since it started."

Levy pointed to a particular case noted in the letter, where waste from the J. Wray & Nephew sugar-processing plant in St Elizabeth has been known to be channelled into the Black River.

"This is what it means by preferring the economy over the environment. The environment that it is preferring over is all these other people whose rights, whose needs, whose hotels, whose access to the beach, whose shops, whose taxi services are being hurt," Levy said.

NEPA was also accused by McCaulay and Levy of being sluggish in putting a stop to Appleton sending its waste into the Black River and in many other similar cases.