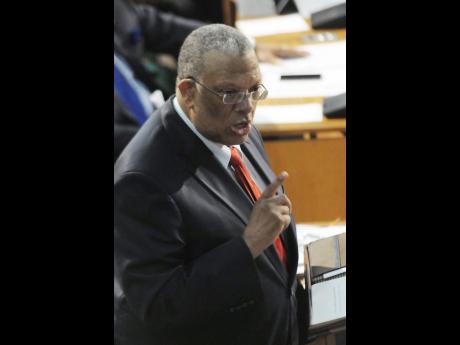 Jermaine Barnaby
Dr Peter Phillips, opposition spokesman on finance, makes his contribution to the Budget Debate in the House of Representatives yesterday.

Dr Peter Phillips, opposition spokesman on finance, yesterday declared the Budget presented less than a week ago by Finance Minister Audley Shaw a "sham" and warned Jamaicans to brace for a new round of taxes in the current fiscal year.

"It is clear from the unreliable Budget numbers that the Government will impose additional taxes on the people of Jamaica later in this financial year," Phillips said as he took note of the $13.8-billion tax package proposed to make up for $12.5 billion in income tax relief announced for PAYE workers earning up to $1 million.

Making his contribution to the 2016-2017 Budget Debate in the House of Representatives, Phillips contended that both the recurrent and revenue sides of the Budget were unreal.

Phillips said the full-year cost of increasing the income tax threshold to $1 million would amount to $16.5 billion, as the $12.5 billion announced would only be for nine months.

Phillips also said the measure was put together to satisfy a Jamaica Labour Party (JLP) election promise which was not feasible at the outset.

"As it turns out, the only feasible way was not the way they proposed, but by raising the threshold and imposing a major tax package," he said.

He continued: "Even now, as it retreats from the position that there would be no taxes, the Government is still not being forthright with the country."

Phillips said the Budget, as presented, requires $33.7 billion in new tax revenue and, with $13.8 billion in new measures, the remainder is expected to come from compliance.

"Neither will compliance provide the $20 billion, nor will the $13.8 billion result from the new measures," he warned.

He said the fact that the International Monetary Fund (IMF) team is returning in July, specifically to look at tax reform, is a signal that there is more to come this year.

"What is more is that we are only facing the first phase of the promise," he said.

"Next year, the remainder (in fact, the larger portion) of the so-called commitment has to be met at the same time, as ways will have to be found to replace the $11 billion that had to be voted from the National Housing Trust (NHT) to support the debt-reduction strategy."

Said Phillips: "The Government, in their quest for election [victory], promised wildly. Now they have broken the promise."

"Instead, the JLP promises that swept them to power will be paid for by the farmers in Lititz and Kellits - and by the schoolchildren and their parents paying more for taxi fares to go to school."

Phillips suggested that the moral legitimacy of the Government has been lost.

"But we must insist on our side that the prospects for the Jamaican people not be sacrificed."

As such, he said the Opposition will be ensuring that debt reduction continues so that real growth can be accomplished, insisting on the reform of the agricultural sector in order to raise rural incomes, and demanding fair treatment for the poor and the vulnerable and the nation's children through realistic budgetary provisions.

The Opposition will also be seeking to ensure cooperation for the benefit of the nation.

"But most of all, we will protect the gains made by the Jamaican people," he said.

Phillips predicted that the imposition of the special consumption tax (SCT) of $7 per litre on automotive fuels will lead to price increases in transport cost for all Jamaicans as the operators could not absorb these increases.

He contended that, as a result of the tax hit, there would be no ease to financial burdens through the "so-called" tax break announced last week by Shaw.

"The taxi fare price hike has already started; pump prices for gasolene and diesel used by motorists have been increased by $7 plus the margin adjustments from the marketing companies and retailers," he noted.

Phillips argued that light bills for all, individuals and companies, will also be increased as the diesel fuel component used by the Jamaica Public Service Company Limited (JPS), except for power from Bogue which has a waiver, will attract the SCT of $7.

Phillips said that the previous administration's imposition of the $7 SCT on fuel was not inflationary because it occurred in a context where oil prices were declining.

"Currently, world oil price is trending upwards, certainly above the US$36 on which the Budget is based," he asserted.