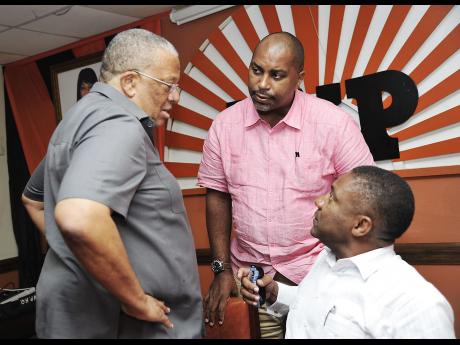 Opposition Spokesman on Finance Dr Peter Phillips yesterday called for Finance Minister Audley Shaw to come clean on Jamaica's debt-reduction programme under the International Monetary Fund (IMF) agreement.
Phillips said, during a post-Budget Debate press conference, that the People's National Party (PNP) was not opposed to necessary adjustments to the programme but urged the Government to outline its intentions.
"What we need to know is that the Government is going to be emphatic in pursuing a debt-reduction strategy," said Phillips during the press conference at the PNP's Old Hope Road, St Andrew, headquarters.
He said such a course was the only way of ensuring, for the medium and long term, sustainability of Jamaica's quality of life for all its people.
"We recognise that our original targets were based on some assumptions on the rates of inflation and growth in the economy and assumptions regarding the capacity of the country to meet these targets," said Phillips.
The former finance minister insisted that as a country, Jamaica has been caught in a debt trap for two to three decades.
"We need to feel that the Government is not simply relaxing its efforts in this regard," he said.
Phillips argued that it had been projected that the country would have achieved a debt-reduction target of 120 per cent debt-to-GDP ratio by the end of the current fiscal year.
Remain constant
But according to the opposition spokesman, the sounding from the Holness administration suggests that this will not be realised.
"The Government, in its fiscal policy paper, has basically said that we will not reach that."
He said the information supplied by the Government suggested that the debt would remain constant this year.
Phillips said as well that the Government data suggest that the deficit is increasing, and over the course of the next three to four years, there will be a slippage of about eight per cent debt-to-GDP on the debt-reduction target.
"There may be reasons for it, but the minister of finance has said nothing about it in his presentation, and so we are left to feel that this may be just an attempt to ignore these hard realities," said Phillips.
He added: "We need to have a better statement of purpose from the Government in this regard."
With the National Housing Trust's  $11.5 billion per year programme to cut the debt scheduled to end this year, Phillips was asked whether the Opposition was averse to the new Government pursuing a course  similar to the one that he had pursued four years ago.
"As far as how they intend to finance their Budget next year, we are open to discussions, but they must be discussions that are not born of simple political expediency on the part of the Government," he said.
gary.spaulding@gleanerjm.com