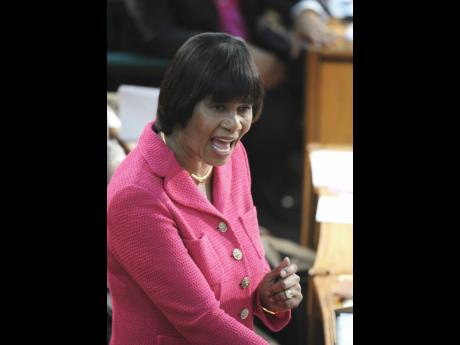 Ricardo Makyn
Opposition Leader Portia Simpson Miller makes her contribution to the Budget Debate in the House of Representatives yesterday.

Opposition Leader Portia Simpson Miller yesterday declared that the Government has veered dangerously out of kilter on a path that she described as "tax-perity", with education and national security already taking a battering.

"Jamaica is now at a delicate stage of recovery, and the Budget being presented threatens to derail that recovery," asserted Simpson Miller during her contribution to the 2016-2017 Budget Debate in the House of Representatives.

She charged that the Government has imposed a huge tax package to finance its election tax plan and echoed Opposition Spokesman on Finance Dr Peter Phillips' sentiment, during his contribution to the Debate, that another tax plan would be forthcoming before the end of the financial year.

Simpson Miller said many of the programmes in the current Budget are familiar, but with gaping differences.

"We left them there - and with adequate funding," she said.

She told the House that the Opposition was concerned that important aspects of the proposed Budget are a deviation from what was left by her administration.

"They said there would have been no new taxes to fund their promised income tax relief," said Simpson Miller.

"Now, every Jamaican man, woman, and child is paying for that promise."

Added Simpson Miller: "We had warned that the promise to abolish income tax for every Jamaican who earns $1.5 million or less was not feasible."

She continued: "We said there was no funding in place to make this possible without new taxes. What concerns me most is the impact this will have, particularly on the most vulnerable."

Simpson Miller stressed that hundreds of thousands of Jamaicans would not benefit from the announced income tax relief.

"I would like to know what the prime minister is going to do for those people," she said.

Simpson Miller said what was worse was that no one would get $18,000.

"Not this year; not next year; not until 2018. Yet everyone will have to pay the new taxes starting last week."

The opposition leader raised questions about the motive of the Government.

"Is it trickery? Is it incompetence?"

Added Simpson Miller: "This is not prosperity as the people are saying. This is 'tax-perity'!"

Simpson Miller charged that the new Jamaica Labour Party (JLP) administration was already proving itself to be a government of announcements that "bear no relationship to formal policy and budgetary provisions to support those policies".

"How else can one explain the several announcements and clarifications made by the minister of education since taking office?" she said.

Simpson Miller charged that "auxiliary fee confusion" has cast a shadow over the future of the education system.

"The minister announced an end to auxiliary fees, while there are inadequate allocations to schools to fill the gap the removal will create," she said.

"This is what happens when you develop policies on the fly and without consultation. "

She cited the announcements of two additional years of high school education, an improved school-feeding programme, and a new early childhood stimulation programme without identifiable funding in the Budget.

"The reality for the country is that an underfunded education system will set back the tremendous gains of the past four years," said Simpson Miller.

She suggested that it was time for Jamaica to again have a national consultation on education and arrive at a consensus for the preservation of its gains and the correction of its problems.

"It is time to end the confusion in education," said Simpson Miller. "We need to forge a partnership for education in the real sense."

Simpson Miller complained that the Government was proposing to spend $500 million less on the police in vital areas such as stores and armoury.

"This is a bad idea," she declared.

"Why would you systematically reduce the budgetary provision to the security forces for essential items such as bulletproof vests and weapons at a time when the murder situation is a cause of great concern?"

"I want to remind the Government that the successful pursuit of growth will be affected greatly by crime," she said.