GREEN BIAS? - Opposition fumes even as Government defends allocation of $$$ to MPs 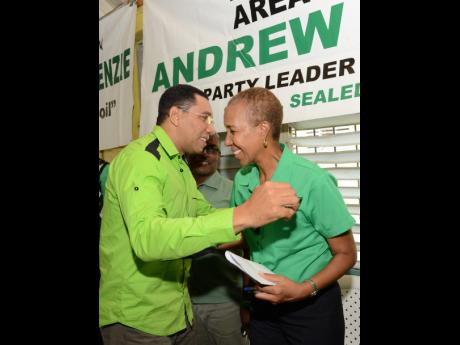 Rudolph Brown
Prime Minister Andrew Holness has a word with member of Parliament for Eastern St Andrew Fayval Williams who has been allocated $600,000 for Labour Day projects in her constituency. 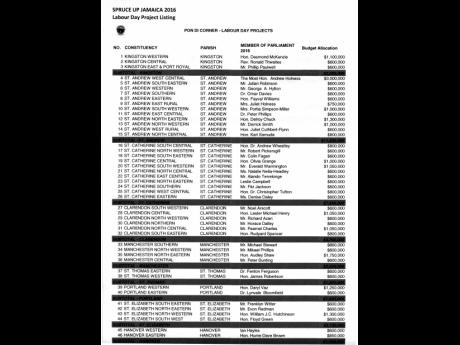 The governing Jamaica Labour Party (JLP) has tapped the Tourism Product Development Company (TPDCo) for $54.65 million, which it has allocated to all 63 members of parliament with the Government members getting the lion's share.

But with members of the Opposition People's National Party (PNP) quickly describing the sharing of the money as inequitable and unwarranted, the Government yesterday, in response to questions from our news team, said the money was part of the new Spruce Up Jamaica Programme, which will see up to $250 million from the TPDCo spent in constituencies islandwide.

"Each of the 63 constituencies will have access to $4 million in support of development projects. Funds already drawn down, per constituency, will be deducted from the cap of $4 million," said the Government in its release.

The Government made no mention of the fact that the official document, released by sources close to the administration, said the money was being allocated for Labour Day projects.

Under the allocation, 30 of the 31 Opposition MPs were allocated $600,000 for work in their constituencies.

The exception was Opposition Leader Portia Simpson Miller, who has been allocated $1 million.

The allocation to Shaw is just under half of the total amount allocated to Manchester, where three Opposition MPs, Michael Stewart, Mikael Phillips and Peter Bunting, share $1.8.

This has spiked the ire of Opposition Spokesman on Finance Dr Peter Phillips, who argued that the course being undertaken by the Government has veered away from equity and good governance.

"The allocation and the apportionment raise very grave concerns about the use of public funds for political rather than development purposes," said Phillips.

He suggested that the allocations appear tilted to give JLP representatives a political advantage. "That's not the purpose of the use of public funds."

Phillips added: "We (the PNP administration) always operated on the basis of equity, and this is part and parcel of a bad, bad approach on the part of the Government, which seeks to use public resources as if it is something under their personal and political control."

An equally disappointed deputy general secretary of the PNP, Julian Robinson, warned that the Opposition would not "sit by idly and allow this type of brazen high-level discrimination" to take place.

"We are going to call out the Government on it and ensure that resources are distributed in an equitable manner as we did when we were in office," said Robinson.

He said that the starkest example of political discrimination is in Manchester where the PNP holds three of the four seats.

"The one held by the JLP has got the equivalent of the combined total of the three that are held by the PNP," said Robinson.

The island marks Labour Day tomorrow, and Holness has announced that this year's National Labour Day Project would take the form of vector control clean-up activities in the municipality of Portmore, with focus on the communities of Gregory Park and Christian Penn.

The Spruce Up Jamaica Programme was an initiative of the Ministry of Tourism and its agencies and ran from 2007 to 2012. Its emphasis was on the physical environment, mind, body and spirit, community development, partnerships through entrepreneurship and promoting heritage.