Large abroad | From cook to commander: Janice Smith humbled by leadership role on US Navy ship 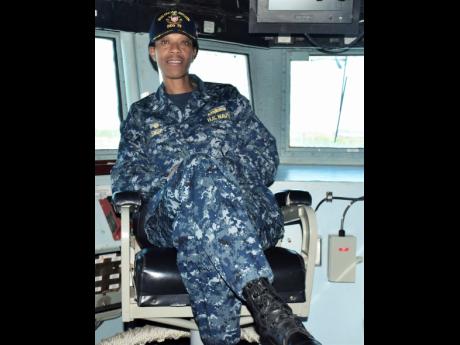 Contributed
Smith: It is a humbling experience and I have a host of colleagues, friends, and family to thank for my achievements. 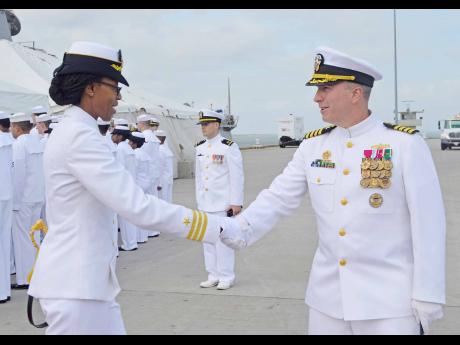 Even as she issues instructions to the sailors under her charge on the United States Navy guided-missile destroyer USS Oscar Austin, Commander Janice Smith is acutely aware of the journey that led her to being appointed commander of the naval ship.

"I started out as a mess-management specialist (cook) in the navy in 1989 and never dreamed that I would some day be commanding a navy warship. I would say that my accomplishment is a true testimony of hard work and the importance of supportive friends, family, and colleagues," Smith said in response to questions from The Gleaner.

A past student of Bog Walk High School, Smith is the first Jamaican and second black woman to become the commander of a destroyer in the United States Navy.

"I ensure that the sailors of Oscar Austin are trained in various warfare areas; that the ship is certified for its respective missions; that as a team, we accomplish tasks - whatever that may be; and that we return everyone home safely to their friends and family," she said in explaining her role as commander.

The passion and energy Smith now puts into commanding the USS Oscar Austin mirrors how she approached her first assignment as a navy cook.

Unconcerned about the menial tasks she had to do, Smith was guided by the philosophy that what seemed insignificant today could provide great opportunities tomorrow.

"I did my job to the best of my ability, even when that job was cleaning the crew's living and dining facilities, cooking eggs at 4 a.m., or pulling all-nighters baking for a crew of 800 sailors," she added.

According to Smith, her journey to being commander has been a challenging but rewarding one.

She explained that her primary reason for joining the navy was to secure funding for her college education, which she did through the Montgomery GI Bill, which makes provision for educational benefits for active-duty members in the US Navy and Army.

"My most difficult experience as a navy woman is leaving my children for extended periods of time. I miss out on a lot of day-to-day opportunities to influence my children's lives and the kind of men they will become," she shared with The Gleaner.

"My most recent deployment in 2015 was nine months. That is a significant amount of time to be away, but I am blessed with a great spouse who filled in the gaps to ensure the growth and development of our children."

In reflecting on her rise to the rank of commander, Smith hailed the efforts of women before her who worked to ensure equal opportunities for women and minorities in the US Navy.

Her upbringing in Jamaica also played a critical role.

"It is a humbling experience, and I have a host of colleagues, friends, and family to thank for my achievements," she said.

"I got here because good people and good prayers from relatives such as my Auntie B in Spanish Town (St Catherine) were behind me. I had a very challenging childhood, but I would not change anything about it. Growing up in Jamaica made me tough and gave me all the necessary tools for success. It built my character and formed the basis for how I live my life today."

Smith urges young girls who want to follow in her footsteps to seize every opportunity to get an education and to work hard towards their goals.

"I started out as a cook in the US Navy and I never dreamed of becoming the commanding officer of a warship, so if I can do this, so can you," she said.