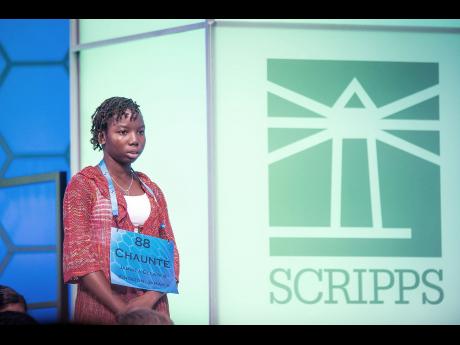 The Gleaner's Children's Own Spelling Bee Champion Chaunté readies for Scripps finals Blackwood has advanced to the finals of the 88th Scripps National Spelling Bee, which is taking place in Washington, DC.

In the preliminaries yesterday, the Ardenne High School student spelt the words a-i-l-e-t-t-e, which is a type of armour, and c-a-n-t-i-n-a, which means a type of bar, correctly.

The preliminaries also included a written test, which determines whether competitors advance to the finals.

Blackwood told The Gleaner that she was proud that she has made it to the finals of what has been a long and gruelling competition.

"For the finals tomorrow (today), I am going to try and study different kinds of words from different languages and hope that a few of them actually come," she said after the preliminaries ended yesterday.

Nordia Craig, business development and marketing manager at The Gleaner, who accompanied Blackwood to Washington, celebrated her performance in the preliminaries of the competition.

"I am elated that she made the finals. She is a great example of perseverance and is upholding the enviable record of Jamaican spellers attending the Scripps Bee by making the finals."

With 285 contestants, the Scripps National Spelling Bee champion will walk away with a US$40,000 cash prize. Blackwood will face off with 49 other finalists today in the finals of the competition, which will be aired on ESPN 2.

I have to say God is good - Daniel
Grandma helped Kesean to prepare for Spelling Bee
She knew other spellers were after her title, so Rhonoya she worked harder
Glenmuir's Hines tops 2017 Spelling Bee
Word-for-word showdown of the Bees