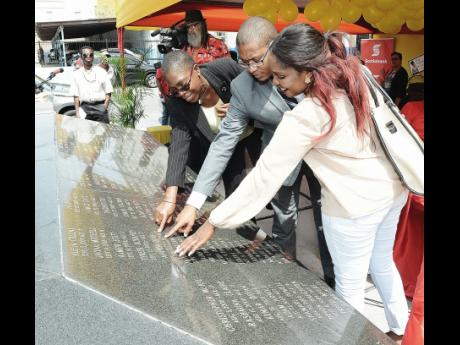 Ian Allen
Nardia Campbell (right), mother of Ananda Dean, who was killed some years ago; Floyd Green (centre), minister of state in the Ministry of eEducation, Youth and Information; and Joylene Griffiths-Irving, executive director, Scotia Foundation, looking at names of children who have died tragically and whose names are engraved on the Crying Child Monument, yesterday.

It's a list no parent wants their child to be on - just ask Nardia Campbell.

Campbell is the mother of the late Ananda Dean, whose murder in 2008 shocked the nation. Ananda's name is engraved on the Crying Child's Monument and her mother was among a group of persons who attended a small ceremony yesterday unveiling the names of an additional 214 Jamaican children who have died under violent and tragic circumstances from May 16, 2011, to April of this year.

The event, held in downtown Kingston, was hosted by the Scotia Foundation.

"New Year's Day, Mother's Day, and, of course, birthdays are very rough because her memory stands out during that time. As we celebrate Child Month, that, too, presents a challenge," the grieving mother told The Gleaner.

"I never stop praying, though, and I fast sometimes. I even ask God why, even though I know I am not supposed to do it, but there are times when I can't help but question Him. She would have been 20 years old in November," she continued.

HERE TO ENCOURAGE OTHERS

Campbell was still not daunted and was ready to empathise, even as she still hurts from the loss of daughter.

"In spite of the pain, I think it is important that I find the courage to come here today. If it is even to encourage a parent or to give words of advice because there are so many mothers going through the same thing."

"I feel that we have to do more campaigns like these, not only Child Month, but push the information and let persons hear the message," Campbell said.

Minister of State in the Ministry of Education, Youth and Information Floyd Green indicated that a robust effort was needed from all stakeholders to tackle violent acts committed against the nation's children.

"Having the names of 214 children engraved on this monument tell us that we have a lot of work to do. It's never a good sign for the development of any country, and so I call upon us to employ a collaborative effort in this fight," Green told the gathering.

"I applaud agencies such as Hear The Children's Cry, which have been doing a good job in getting the word out there and protecting our children. We still have work to do, and I assure you that the Government stands ready to do all it can to play a part in this fight," he continued.