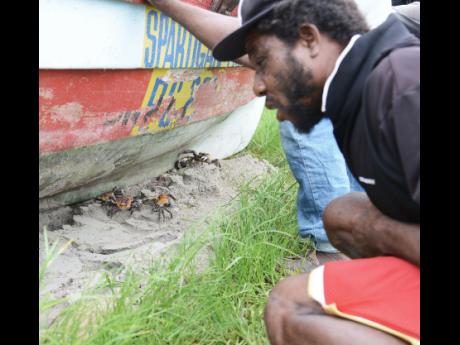 Ricardo Makyn
A fisherman looks at a some of the remaining crabs that had overrun sections of Rocky Point Beach in St Thomas in recent days. 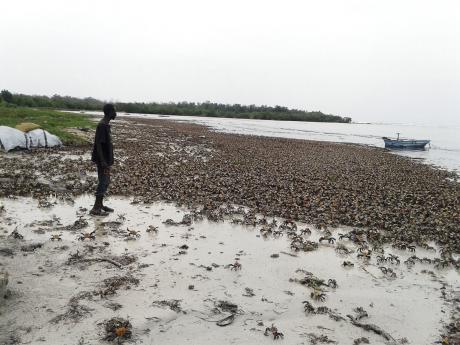 What seemed like thousands of crabs flooded the shoreline of the Rocky Point Beach in eastern St Thomas last Tuesday and Wednesday, leaving locals shocked and amazed by the phenomenal sight.

One resident, who was able to capture the crabs on video, said it was the "first time in history" she was witnessing something of the sort.

Identifying the crustaceans as Chinese Mitten Crabs or Shanghai Hairy Crabs, as well as Mango Crabs in local parlance, president of the St Thomas Environmental Protection Association (STEPA), Appollonia Davidson, told The Gleaner it was abnormal for its type to appear on the coastline.

Davidson said she believed the the destruction of the parish's mangroves was a trigger to the sudden appearance of the crabs.

"There's an encroachment on the mangrove areas along the coastline from Leith Hall to Rocky Point; that is the section where the coral reefs used to be. They are no longer there because of the overfishing of the area, and many other factors," she said.

Davidson said the mangroves have been used to make charcoal, thus displacing the crabs.