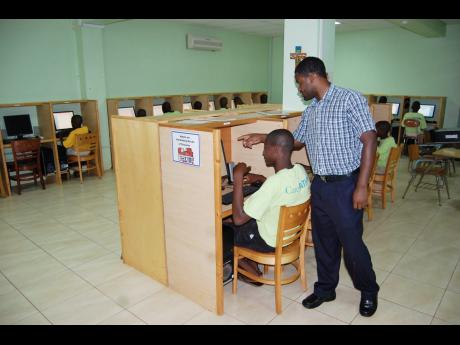 File
Boys inside the St John Bosco Boys' Home's computer room being guided by an instructor.

As Child Month comes to a close, the Private Children's Homes Association (PCHA) has revealed that a majority of the 50 facilities that fall under its umbrella are on the brink of shutting down because of a lack of adequate financial support from Government.

Sister Susan Frazer, chairperson of the association, told The Gleaner that the homes have been facing significant problems as they struggle to keep their doors open.

At least three private childcare facilities have closed down in the last two years because of financial difficulties.

The PCHA is contending that private homes have not received an increase in their subvention, even amid increasing operational costs and a reduction in financial support from donors.

The association is also arguing that government-run homes receive more funding despite the fact that they normally have fewer children to care for and fewer programmes which enhance the development of the youths.

The administrator of one private home told The Gleaner that the money she receives from the Government can barely cover food and utility bills.

She also revealed that last month, she had to utilise her savings in order to ensure that the children at the home continue to attend school.

"You know what is the sad thing? The prisoners receive more money per week for their upkeep than the children in the homes. So are we saying that criminals are more important than the children?" she asked in frustration.

Private homes currently receive $6,000 per week for each child, the lump sum of which is paid over to the homes monthly, based on the number of children they have under their care - which fluctuates because of the movement of children in and out of care.

A meeting of the PCHA, with newly minted junior minister with responsibility for youth, Floyd Green, did not do much to assure the private homes, as they said he could not commit to an increase in subvention given that the Budget has already been cast.

"We met with him, but that did not achieve much, because he told us there is not much he can do. What I suggested to him is that he at least try to get an agreement with the Jamaica Public Service and National Water Commission where the bills for the homes are either discounted or written off, because the chunk of the money we get goes to paying those bills and not for the actual care of the children," a PCHA member said.

Peggy Russell, the administrator of the St John Bosco Boy's Home, noted that the numerous requirements demanded by the Child Development Agency have compounded the situation, as the finances required to fulfil the essentials for licensing have not been forthcoming.

Another concern of the private homes the cost associated with caring for children with special needs.

According to the operators, no consideration is given for these children when Government allocates its funding.

"I have just started to send some of the small ones to school, and their schooling is so expensive, especially for the special-needs kids ... ," another private home operator told The Gleaner.

"I feel ashamed to pay my staff, because what I have to pay them is not enough ... . I know the kids are blessed, because they are covered by the love of God, but the time is coming when I will have to close down the home. It will be hard to do, but I have no choice."