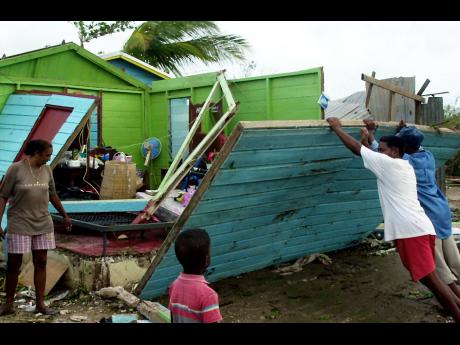 File
Residents trying to pick up the pieces of their houses in Portland Cottage, Clarendon, after Hurricane Ivan did significant damage in 2004. 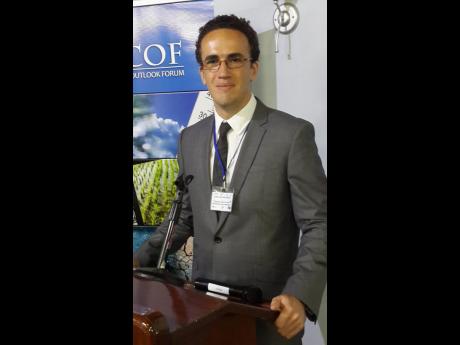 Cedric Van Meerbeeck, climatologist at the Caribbean Institute of Meteorologist and Hydrology (CIMH) based in Barbados
1
2

The 2016 hurricane season is expected to be very active, with a forecast of increased rainfall and more flash flooding over the next six months.

Based on data and predictions from several world-leading weather agencies, it is forecast that there will be approximately 10-16 named storms, four to eight hurricanes, and one to four intense hurricanes. This was announced at the eighth staging of the Caribbean Climate Outlook Forum (CariCOF), now in its fifth year, being held at the Fort Young Hotel in Roseau, Dominica. The 2016 hurricane season officially starts tomorrow, June 1.

"We expect that there will be more extreme wet spells. That means a couple of days in which there will be enormous amounts of rainfall that can come. Because that chance is getting higher and higher as we go on into our wet season, the risk of flash floods that lead on from such wet spells becomes much greater," Cedric Van Meerbeeck, climatologist at the Caribbean Institute for Meteorology and Hydrology (CIMH), based in Barbados, told The Gleaner.

"I'm not saying there will be much more of those wet spells - because they are not very frequent anyway - but you just need one in a specific area to actually cause flash flooding, and correspondingly, depending on the slope, also landslides."

The shift from the El Nino system into the La Nina system is also worrying because of the expected impact and implications. It is expected to increase the chances of a wetter season.

"There are two reasons for what we are seeing. A La Nina usually brings us more rain because it increases the capacity of single storms to become more powerful, and when a storm is more powerful, it is going to rain more. So with the rainfall intensity increasing, that is when you see those flash floods," said Van Meerbeeck.

"The other reason, and why we are worried now, is that we are going out of an El Nino but are not yet in the La Nina. After a drought, whatever rainfall we have, if it is very intense on dry soil, if the dry soil does not have the capacity to absorb a lot of the rainfall, there is still a high chance that whatever rainfall we have runs off the surface and, therefore, causes flash flooding as well. And for the landslides, there is also an impact as well because in a dry season, the plants' rooting activity has been reduced, so the roots are less strong. That means they stabilise the loose soil less and, therefore, there is more chance of landslides as well."

Caribbean meteorologists and international climate researchers are meeting over the next two days to not only officially announce the forecasts for the Caribbean's wet/hurricane season and discuss their implications for the region with several national and regional stakeholders in climate-sensitive sectors, but to look at mitigating the impact, particularly on the health sector, and creating effective early warning systems.

Discussions will also be had on how the Caribbean Small Island Developing States can build resilience to extreme weather and climate events, with a focus on the important role that national and regional health and disaster risk management agencies play in building a climate resilient Caribbean.

This is the first year that the health sector is being engaged in this conference, particularly because of the expected increased rainfall, which will lead to more mosquito-breeding sites and the nations' fight to control vector-borne diseases such as the Zika virus, chikungunya, yellow fever, and dengue fever. The discussions will look at how higher temperatures, drought, and increased rainfall affect these diseases transmitted mainly by the Aedes aegypti mosquito.

"The theme of this year's conference is to look at the impact of climate change on the health of the nations and how to integrate climate-change information into the health sector decision-making process," stated Adrian Trotman, chief of applied meteorology and climatology at CIMH.

The organisers are also hoping to work with the high level stakeholders to create effective real time, early warning systems to better aid countries in preparing for the impending disasters. Early warning information is very important in helping Caribbean development agencies and government ministries that especially deal with health and disaster risk reduction.

The organisers felt it was important to use this year's conference to look at disaster risk reduction on the health sector, following last year's Tropical Storm Erika that significantly damaged Dominica and posed great public health threat in its aftermath. Dominica suffered damages amounting to EC$1.2 billion in extensive infrastructural losses, multiple injuries, and deaths.

Officially named the 2016 Wet/Hurricane Season Caribbean Climate Outlook Forum (CariCOF), the event is organised by the regional climate-services provider, the Caribbean Institute for Meteorology and Hydrology (CIHM) in collaboration with the Dominica Meteorological Service. The development partners include the United States Agency for International Development (USAID), the Department of Environment Canada, The World Meteorological Organisation, the International Research Institute for Climate and Society (IRI), and the University of Arizona, United States.