$100m ZIKV bite - Government not sure how widespread Zika is, allocates more money for response 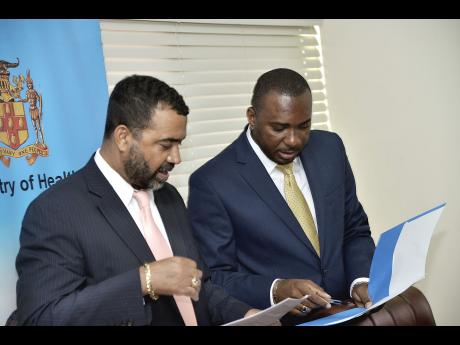 Norman Grindley
Dr Winston De La Haye (left), acting chief medical officer in the Ministry of Health, and Dr Kevin Harvey, permanent secretary in the ministry, going through a document before a press conference on ZIKV at the ministry yesterday.

Although millions of dollars more is to be spent on the anti-Zika campaign, there is still no clear picture as to how many Jamaicans are being affected by the mosquito-borne disease, which has been confirmed in two pregnant women.

But the number could arguably be more as he reported that as at May 29, the ministry had received 1,969 notifications for the virus. Of that figure, he said 1,387 "fit the case definition for Zika and were classified as suspected Zika fever".

"The number we have reported, which to date is 16, is subject to lab test and confirmation, but I do take the point, and I saw in a media house today [yesterday] that those international [reporting] standards don't necessarily reflect the reality on the ground," Tufton said, referring to a Gleaner report in which general practitioners called for the reporting of suspected cases, which, they say, may give a more accurate picture of the virus spread.

"We believe it is important to reflect those realities and the challenges and, therefore, we are reporting the suspected cases," he said, clearly trying to avoid the missteps of Dr Fenton Ferguson, whose removal as health minister in the previous administration was helped by accusations of under-reporting of incidents of chikungunya, another mosquito-borne virus, which caused a public-health emergency almost two years ago.

But even the reported suspected cases are questionable as the permanent secretary in the health ministry, Dr Kevin Harvey, argued that some doctors may not be reporting all the suspected cases.

"The reporting is a manual process at this stage, and we've recognised that that presents a challenge because many persons are not taking the time to do that," he told journalists, noting that medical personnel are lawfully bound to report suspected cases. The ministry could not say when a digital form being worked on would be ready.

Dr Mary Sloper, vice-president of the Association of General Practitioners, argued that the reporting mechanism was too tedious and the true number of cases was not being reported.

Tufton quoted the World Health Organization (WHO) that estimated in an earlier report that about 70 per cent of the 2.7 million Jamaicans would be infected by the virus.

Meanwhile, the health ministry is now heading into phase two of its anti-Zika campaign, with $100 million added to the response efforts.

It will see, among other things, greater focus on the monitoring of pregnant women who, if, infected, could transmit the virus to their babies, who could end up being born with microcephaly.

This has taken on greater significance as Tufton reported yesterday that officials are monitoring two pregnant women who tested positive for the virus in the last three months. One of the women, 21, is from Bull Bay, St Andrew. She was 22 weeks' pregnant at the time. The other woman, 32, from St Catherine, was 24 weeks' pregnant when her positive result was confirmed.

The permanent secretary said the average number of microcephaly cases in Jamaica is not known as the condition is not tracked in health institutions. A register has not been established to capture the cases.

"Microcephaly is not one of the reportable conditions that we track over the years. It's not one of the recommended WHO things to be monitored. We have to now be looking back to try and find out what is the average number of microcephaly cases," Harvey told journalists at the ministry's offices in New Kingston.

Jamaica has advised women to delay getting pregnant in light of the initial spread of the virus in Jamaica, for which there is no cure.

Tufton is to make a statement in the Parliament next week, giving more specific details on the response to Zika, a WHO-declared global public-health emergency.