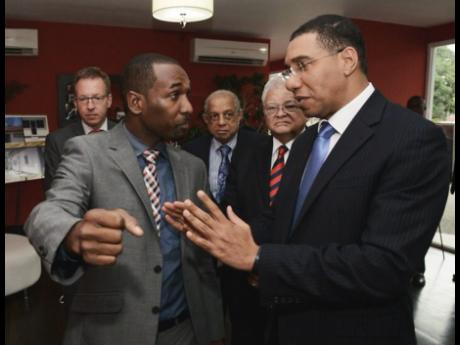 Rudolph Brown
Prime Minister Andrew Holness (right) and Dwyte Bremmer (left), team leader, Chemistry Department of the Bureau of Standards, are in deep discussion, while Karl Samuda (second right), minister of industry commerce, agriculture and fisheries; Colin Bullock (beside him), director general of the Planning Institute of Jamaica; and Achim Schaffert, (in the back), head of Operations Delegations of the European Union, look on.

Prime Minister Andrew Holness yesterday declared that an element of his Growth Agenda has been activated with the joint effort of the Planning Institute of Jamaica (PIOJ) and the European Union (EU) to set in motion a programme to drive food exports.

Holness highlighted the urgent need to revitalise export output to break the back of the no- and low-growth era as a critical component of his Growth Agenda.

"The challenge that we have today is that growing the economy requires leadership," said Holness as he addressed the Economic Partnership Agreement (EPA) Capacity-Building Projects Export Forum.

At the same time, Karl Samuda, the minister of industry of commerce, agriculture and fisheries, expressed appreciation for what he said was the positive impact of the EPA projects over the years in building food-safety capacity.

Achim Schaffert, head of Operations Delegations of the European Union, also gave his blessing to the forum.

The PIOJ, which has undertaken the export thrust, falls within the ambit of the Ministry of Growth and Job Creation.

The PIOJ is responsible for the implementation of the EPA I and EPA II projects in the amount of €2,250,000 and €5,000,000, respectively. EPA II builds upon and strengthens the goal of EPA I, which seeks to create a sustainable and enabling environment for the increased presence of Jamaican food exports in the region and in the EU-CARIFORUM markets.

The export forum was attended by representatives of sponsorship body the EU and members of the diplomatic community.

The EPA is a free-trade agreement which has as its objective improving trade and investment between the two regions to enhance sustainable growth.

Holness said that the PIOJ, which has taken under its wings the export thrust, has to be instrumental in the Growth Agenda.

"The PIOJ is instrumental in the economic growth and job creation, and this export forum is an example of its instrumentality," he said.

"Whenever we talk about the growth challenge, we know that we have to improve trade, but we will also need to improve infrastructure, ease of doing business, and safety and security, as well as access to finance," he said.

Added Holness: "The job of ministers, public-sector workers, technocrats, and bureaucrats is to be instrumental in loosening these binding constraints on our growth potential."

He continued: "I would like to recognise the value of this programme in loosening one major constraint on our growth potential."

He said any growth programme has to rely heavily on firms in the context of businesses and enterprises - micro, medium, or large.

"For businesses, we have to make sure that finances are available and that they have good leadership, with entrepreneurial training and good business-management skills.

"But most important is that they must have access to markets, whether it is local or global," said Holness.

He said the local markets would never be sufficient to grow businesses to the level that results in major economic growth. "So Jamaica must develop a strategy, and we are, as a government, undertaking several strategies in this regard to expand Jamaica's access to markets."

Director of the PIOJ Colin Bullock said that the PIOJ was exercising two very important roles in the programme of cooperation between the Government of Jamaica and the EU. That cooperation has continued to develop and grow after more than 40 years of partnership.

He noted that the EPA between CARIFORUM countries (CARICOM and the Dominican Republic) and the EU was signed in 2008.

The forum has been designed around the theme 'Building National Capacity: Driving Exports Through Enhanced and Standardised Food Safety and Security Systems'.