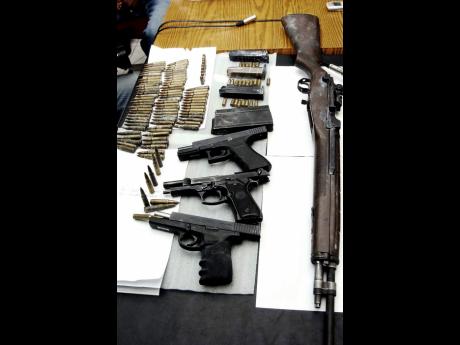 File
In this file photo these guns, including a sniper rifle and three pistols, as well as 128 assorted rounds of ammunition, were recovered during an operation by law-enforcement officers.

A steady stream of guns continues to flow from the United States into Jamaica despite a raft of measures implemented by local law-enforcement authorities.

In the last two years, the US Bureau of Alcohol, Tobacco, Firearms and Explosives (ATF) has traced the history of 991 guns seized in Jamaica over the period and found that 567, or nearly 60 per cent, were "sourced in the US".

The term "sourced in the US" refers to guns manufactured in or legally imported into the US.

According to the ATF, 414 guns

were tracked to non-American manufacturers, while the origins of 14 firearms could not be determined.

Just over 2,200 persons were reported killed in Jamaica over the last two years and police statistics show that nearly 70 per cent of those killings involved the use of a firearm.

National Security Minister Robert Montague acknowledged that Jamaica has "diffi-culties and challenges" at established ports of entry and indicated that he was not satisfied with what is being done by local law-enforcement authorities to stem the flow of guns into the island.

"I'm satisfied, based on the level of resources, with what they have done, but, in terms of a national priority, no, because more can be done," said Montague.

"Can you imagine what is happening at the non-established ports of entry?" he questioned during an interview with The Gleaner.

Montague revealed that since taking off in March, he requested an audit of the nation's border control apparatus, which exposed "a number of challenges".

"The challenges that are there will allow a number of things to leave the country ... and maybe equally to come in," he said.

However, the national security minister said a number of interim measures have since been put in place to make him "comfortable".

The 991 guns sent to the ATF comprised 485 seized last year and 506 that were recovered the previous year.

Of the 567 guns 'sourced in the US', the ATF revealed, in separate reports for 2014 and last year, that 428 were manufactured there. The remaining 139 were legally imported.

The ATF reports - copies of which were obtained by The Gleaner - show that 209 guns recovered in Jamaica over the two-year period were traced to retail purchasers in the US, while 126 were "traced to a foreign country".

"The term 'traced to a foreign country' refers to those firearms that were determined by ATF to be transferred from a US federal firearms licensee to a foreign government, law enforcement, dealer or entity," the agency explained.

ATF said it was unable to determine the purchasers of 232 guns.

Major Richard Reese, chief executive officer of the Jamaica Customs Agency (JCA), said the vast majority of firearms are smuggled into the island by fishermen, either as part of the guns-for-drugs or guns-for-food trade.

"Based on the information available to me, the majority of illegally imported firearms come in through informal cays and inlets around the island.

"These trends have expanded not only to Haiti, but as far as Venezuela, where these guns are ferried from country to country," he said.

"Any country that is an island and has several points of entry, the cost of surveillance is very expensive," the JCA boss explained.

He said his agency, working with local and international partners, has put a number of measures in place to shore up the nation's borders.

"Without those interventions, it could have been far more [firearms coming in]," Reese added.

While noting the existence of lax gun laws in some US states, Jamaica's Deputy Police Commissioner Glenmore Hinds said he was satisfied that American law-enforcement authorities are doing all they can on their side of the border to stem gun shipments into Jamaica.

The problem, he said, is that in order to remain relevant to their criminal gangs, Jamaicans living in the US continue to send back guns to their cronies by exploiting local freight-forwarding companies.

"Certainly, Americans are not - in the main - sending guns to Jamaica. It's really Jamaicans living in America," he asserted.

Hinds, however, made it clear that there is no evidence that local freight-forwarding companies are complicit in gun smuggling.