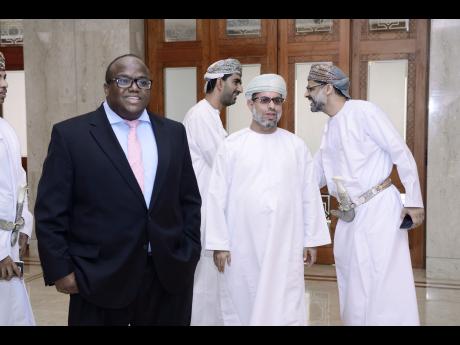 Oman is perhaps one of the most unlikely places to find a Jamaican working in the area of energy policy, but that is exactly where you will find Duane Rowe.

Now the planning and economics manager at the Oman Power & Water Procurement (OPWP) Company, Rowe first migrated to the Middle Eastern country in 2011 to take up the post of senior planner at OPWP after being approached by an international head hunter.

"The move to Oman is perhaps my best decision yet, primarily because I worked with a boss during the first few years whom I believe to be the best thinker I have met, and many insightful discussions with him have helped shape my own thinking," he said in response to questions from The Gleaner.

As one can imagine, the cultural idiosyncrasies of the Arab culture took some getting used to.

"I recall making my first cultural faux pas on the very first day on the job; I offered my hand for a handshake when being introduced to a female colleague. My then COO (chief operating officer), who was taking me around the office, had to pull me aside and explain that it is "haram" (forbidden) in the Arab world for a Muslim female to touch a male that is not a relative," Rowe shared.

In his role as senior planner, Rowe provided technical leadership on the economic analysis of Oman's power market to make recommendations on supply- and demand-side strategies to meet capacity gaps, and to develop bulk supply tariffs, among other things.

Within a year in this role, he received an employee recognition award for excellence and consistently exceeded expectations on his performance appraisals. It is no surprise then that he was promoted in September of last year.

"The new role comes with much greater responsibilities, which can become overwhelming at times, given that Oman has very high-demand growth requiring rapid capacity additions," he said.

Rowe attributes his success at OPWP to the values learnt during his first job at the Jamaica Public Service Company (JPS), where he secured under a graduate trainee engineer scheme after completing his first degree in electrical and computer engineering at the University of the West Indies' St Augustine campus in 1999.

"At the end of the graduate scheme, I settled in JPS's System Planning Department as a planning engineer ... . In addition to honing my analytical skills, the role allowed me to develop a big-picture strategic mindset, which complemented my eye for details. The foundations provided by this role at JPS were instrumental in shaping my career trajectory," he added.

That trajectory has seen Rowe hold policy and advisory positions at the Office of Utilities Regulation, Board of Examiners, Poyry Management Consulting, and Caribbean Electric Utility Service Corporation.

The holder of three energy-related master's degrees explained that his drive to become what he calls a T-shaped professional - an individual who has technical expertise in his field as well as broad contextual business breadth and multidisciplinary skills - was cultivated by his upbringing in the inner-city community of Maxfield and the years spent at Kingston College (KC).

"My KC experience, as highlighted above, instilled in me grit and resilience, while my parents - who were not vastly educated themselves but were big advocates of education - inculcated my love for learning, among many other positive qualities. It is thus fair to say that my parents and my alma mater had great bearings on the person I have become," he said.

According to Rowe, the Middle East has been untapped by Jamaican job seekers and provides opportunities in diverse sectors in which Jamaicans can excel in the way that he has. He pointed out that working abroad fits with his career aspiration of helping to shape developments on the global energy scene and that he has obtained satisfaction from the fact that his work in Oman has led to initiating several multibillion-US-dollar power projects.

"After garnering significant international exposure in the energy industry, I am looking forward to returning to Jamaica and contributing to ongoing efforts to positively transform the energy sector. In the meantime, I hope to help inform energy discussions on the island," he said.