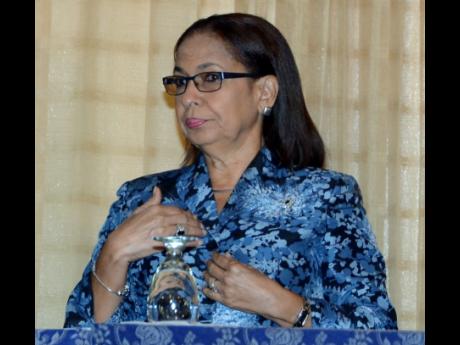 The Jamaica Confederation of Trade Unions (JCTU), which represents more than 40,000 public-sector workers, has given a positive grade to the leadership of the labour and social security ministry over the first 100 days of the Andrew Holness administration.

Helene Davis Whyte, vice-president of the group made up of about 11 unions, gave the new portfolio minister, Shahine Robinson, a seven out of 10 for her efforts so far in steering the policy direction of the ministry.

Davis Whyte said Robinson has started off well by engaging with stakeholders.

"The Ministry of Labour and Social Security is not one of those ministries that one would have been able to identify clearly any particular action that would have been announced by the new administration in the first 100 days. (But) since the minister has assumed office, she (has) met early in office with the members of the Labour Advisory Council. In that meeting, she indicated what it is that would be the focus of the ministry and that the Occupation Safety and Health legislation was one of the main things."

The JCTU vice-president is also commending the Holness administration for a "spirit of continuity" by continuing with some of the policies inherited from the previous People's National Party administration.

Among the urgent actions that the unions want, according to Davis Whyte, is some focus on the employment of foreign nationals in positions that could be filled by locals.

The union leader says Shahine Robinson has committed to making the issue a priority.

It has not been entirely smooth for Robinson so far as a controversy flared up over a Canadian news report that neither the Jamaican Government nor any of its agents tried to offer the injured farmworker Sheldon McKenzie access to medical care before his death on September 17, 2015.

The 39-year-old had fallen ill on January 26 of that year.

Up to late last month, the ministry was clueless as to the cause of death.

Robinson also used her early days in office to attempt to give the assurance that the National Insurance Scheme (NIS) would remain viable.

She issued the statement following a report would concluded that the National Insurance Fund, which manages the NIS, "will be exhausted by 2033" and its deficit two decades later would be J$384 billion.

The Holness administration, which took state power on a campaign of "poverty to prosperity", will mark 100 days in office this weekend.