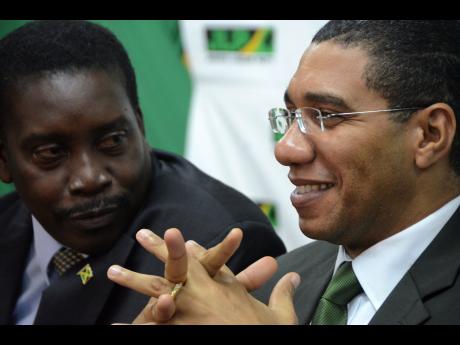 The Government of Prime Minister Andrew Holness and his National Security Minister Robert Montague has scored low to no marks for failing to implement any new crime initiatives in its first 100 days to curb the homicidal monster which has turned Jamaica into a bloody paradise.

In addition, Montague's now infamous suggestions - that policemen wear condoms, because too many are in the family court for child maintenance; and that second-hand cars being used to ease the motor vehicle shortage in the constabulary was better than no car at all - have not endeared him to commentators attending Gleaner Editors' Forum last week examining the Government's performance in its first 100 days in office.

This upcoming Sunday will mark the 100th day of Holness' administration.

"My comments on security are not specific to one administration or the next. Crime is a major problem and so far it still exists as a major problem," said Gary Peart, chief executive officer of Mayberry Investments.

According to Peart: "... Crime continues to get worse. And there has to be a systematic way in which we deal with major crime. We have gone through a 100 days and we have not seen anything."

Members of the security forces have been deployed to several parts of the island as crime, especially homicide has spiraled out of control, causing senior crime fighters to scratch their heads.

Police Commissioner Dr Carl Williams recently moved commanders to different divisions within the Jamaica Constabulary Force (JCF), in a bid to stem the bleeding in Western Jamaica, Clarendon and other sections of the island.

Blood is now flowing in multiples and last week's double murders in several parishes, including outside a business place at Southdale Plaza in St Andrew, have caused fear to be at a paralysing level.

Yaneek Page, founder and managing director of Future Services International Limited (FSIL) a pioneering company in legal funding in Jamaica, said in the initial stages of the Holness administration there were more feet on the ground.

"That was the communication we had heard, that we would actually see more officers on the ground. And we have heard a lot about using used cars and so on. But I don't think we have seen any major policy moves that would give us confidence that we are going to see anything that will see a reduction in crime so far," said Page.

For insurance executive Donovan Mayne, the administration's performance on security gets a low rating.

"If I were to use the rating on some consumption goods... it would be a zero rating just like GCT (general consumption tax)," said Mayne.

"There is nothing happening in the Ministry of National Security, even though 100 days is a little hard to measure. I think six months to a year (would provide a better judge of performance). Nothing has come out as policy, though."

Former Education Minister The Reverend Ronald Thwaites said it was commendable that the minister (Montague) was consulting and that he has appeared to be approachable.

"In terms of leading policy initiatives, it is condoms, used cars and death penalty," Thwaites however added.

Management consultant Dr Henley Morgan said he has served on two committees on crime so far and they have been the biggest waste of time he has experienced.

"Nothing ever comes of these recommendations. I had a chance to watch the new minister up front at a recent function and I watched the optics, mannerisms and words," Morgan said.

"One of the things I am sure of is that he will not make the mistake of the previous ones in pretending that he is a crime specialist."

He added: "We have not seen him take on any big and controversial issues so far."

Morgan said however that ministers of national security are stymied because their roles are not well defined.

The police have indicated that, since the start of the year, there has been a 10 per cent reduction in all categories of crime, except murders, when compared with the similar period last year.

The St James division continues to record a high rate of murders with 103 since the star of the year, a 27 per cent increase over the same time last year.