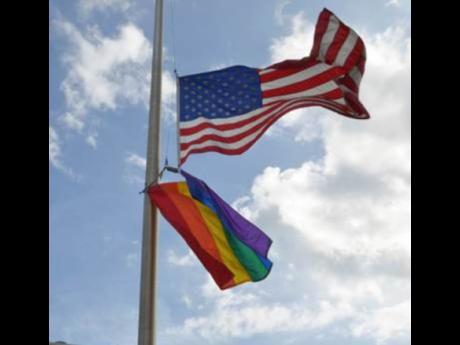 The US flag being flown at half-mast and below it, the rainbw flag, at the US Embassy in Kingston.

The Attorney General Marlene Malahoo Forte is facing mounting criticism on social media following a post she made on Facebook and Twitter denouncing the decision of the United States Embassy in Kingston to fly a rainbow flag in solidarity with the victims of the Orlando gay nightclub shooting.

Forty-nine people were shot dead in the attack early Saturday morning by a man who the police later shot and killed. The post also sparked an early morning response from the US Embassy.

“@mmalahooforte we’re listening. Explain the legal reasoning? [It] was an attack of terror!! And!!  Hate targeting the LGBT community," the embassy posted.

Earlier, the embassy tweeted that it has been flying the American flag at half-mast in memory of the Orlando victims and the rainbow flag in solidarity. Among those criticising Malahoo Forte on Facebook is Alexis Monteith.

"Do you believe the law in question is respectful of the difference of others (LGBT community)?" he asked.

Monteith also questioned whether Malahoo Forte was of the opinion that "being respectful" should extend to silence of over other countries’ laws that oppress and take away the rights of people because of their differences, in some cases criminalising them.

Malahoo Forte would ignore some of vulgar responses to her post, but apparently reacted to Monteith.