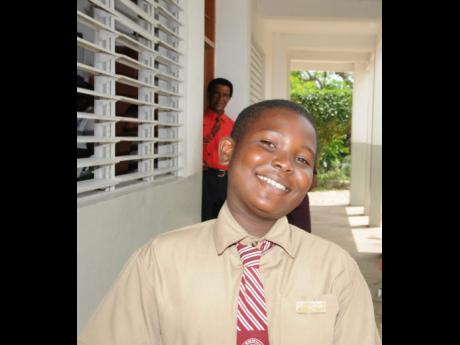 With those odds, and many more, other 11-year-old boys might have given up hope completely and resigned themselves to failure. But that is not Othniel's story.

"Well, my dad passed away about three or two months before GSAT. I was crying every single day and I didn't know what to do with myself," he told The Gleaner.

"My mom kept motivating me, saying, 'Son, I know that dad is gone, but we have to get that behind us'. She helped me with my studying, and she took her time because she knew I was unsteady about dad," he told The Gleaner.

"My grandma and grandpa, they were sick. They were very sick! (Leading up to) GSAT, they got worse. We had to be up and down because they were in the hospital (in Kingston) - in and out. My mom wanted to see them in case of anything," he said.

Othniel also had trouble in the classroom.

Throughout grade six, he has had three different teachers. This caused him to take a while to settle in with his lessons.

"It was very hard because some teachers, they just could not connect with me. Some of the things they were teaching me, it was just not coming off. They changed two teachers early in the season. As we were coming to the time of GSAT, they got a teacher, Mr Walters. He came in the last two months to GSAT and he really helped us. He helped with drilling, and that helped us to get more prepared for GSAT," he said.

Wanted to go to Wolmer's

Othniel managed to land himself an 85 per cent average and a spot at the prestigious Glenmuir High School, but the very articulate young man would have preferred to attend the Heroes Circle-based Wolmer's Boys' School.

"I wanted to go to Wolmer's because my family was thinking about moving to Kingston to be closer to my grandparents, and we were planning to move after GSAT. When I got Glenmuir, I was really down, thinking that I would not get to live in Kingston because I like the house up in Kingston."

Othniel is the current head boy at Glenmuir Prep. He has also played his fair share of sports. His aspiration to become a physiotherapist has come out of his experiences with his grandparents' spells of illness.

"The sports weren't really hard. I did three seasons of football. I just started table tennis. I did one year of School's Challenge Quiz and then cricket. I did two years (and) I am the goalkeeper in football," he said.

He continued: "I want to be a physiotherapist. I want to be like the doctors who helped them (my grandparents) to get better. I want to just pay that back to people."