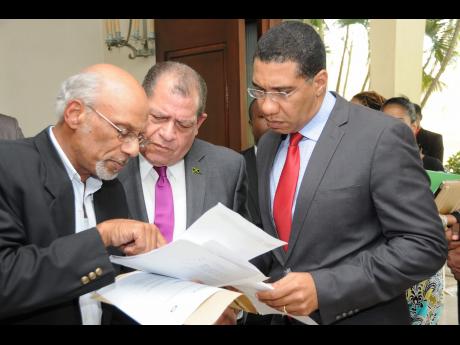 Jermaine Barnaby
Earl Patterson (left), acting CEO of the National Works Agency, makes some points about the roadwork plans for St Thomas to Prime Minister Andrew Holness (right) and Finance Minister Audley Shaw during a press conference yesterday at the Office of the Prime Minister in St Andrew.

Faced with concerns that St Thomas was being treated as the 'forgotten parish' once again, Prime Minister Andrew Holness used a press conference yesterday to assure residents that they would get a highway, though not on the scale once imagined.

Holness announced that the highway would include a four-lane thoroughfare running from Harbour View in St Andrew to Bull Bay, which lies on the border of both parishes.

That section of the highway will cover 6.8 kilometres, one-sixth of the distance that was originally planned to run from Harbour View to Morant Bay.

As the project continues to Port Antonio, Portland, it will be reduced first to a three-lane roadway and then to two lanes.

Initially, the Portia Simpson Miller administration in 2015 announced that US$385 million would be spent to build the highway running from Harbour View to Port Antonio as part of the South Coast Highway project.

Holness now says a similar amount of money - US$384 million - will be spent "for the improvement of road network in the southeastern and southwestern sections of Jamaica".

"(There will be an) upgrade of the road between Bull Bay and Morant Bay, which may include minor realignments of the road, a truck lane where required, and the reduction of deep corners and steep grades (as well as) the improvement of the road from Morant Bay to Port Antonio and Morant Bay to Cedar Valley, which is not being considered as a toll road at this time."

The prime minister called the press conference following Finance Minister Audley Shaw's announcement on Wednesday that the original highway plan, which Shaw said would now cost US$500 million, "does not make economic sense" and would be reconsidered.

"We believe this is a far more cost-effective plan as it will reduce the need for massive land acquisition. In fact, under the former plan, there would be a cost of approximately US$120 million to acquire land and other civil infrastructure," Holness argued yesterday.

"It (new plan) would also reduce the negative impact on communities and the environment. We believe that this plan is a better plan. It gives access, it gives a better road, reduces cost, and still achieves the objectives that we want."

It is not yet clear how the change in plans will affect the developmental prospects for that side of the country, but the downgrade of the work coincides with what Holness said would be an extension of the existing toll road from May Pen, Clarendon, to Manchester.

"The revenue generated from this leg will partially support the repayment of the loan," he said, adding that his administration believed in projects that made "economic sense".

Of the US$384 million to cover the project, $326.5 million will come from a loan being finalised with Exim Bank of China.

The Jamaican Government will be providing the remaining US$57 million.

Meanwhile, the two St Thomas members of parliament (MPs) have given their support to the project.

"The people of St Thomas are united around the issue. It is not a PNP (People's National Party) or JLP (Jamaica Labour Party) issue. I have some clarity now (given) the fact that the project is still on," said Dr Fenton Ferguson, St Thomas Eastern representative for the PNP.

After Shaw indicated that the Government was planning to scrap the original plan for the highway project in the parish, Dorrett Abrahams, secretary of the St Thomas Parish Development Committee, warned of social unrest.

"We will have to do a Paul Bogle," she told The STAR yesterday.

Stakeholders have accepted that St Thomas' economic prospects have been undermined by historically limited investment in infrastructure to make the parish attractive to investors.