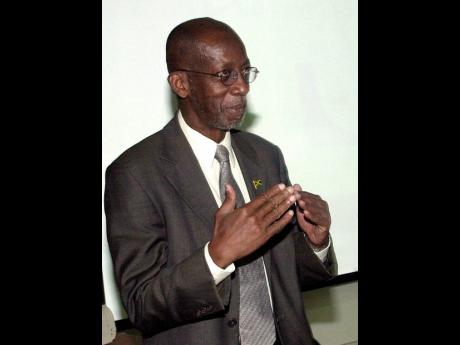 Ambassador Burchell Whiteman, a former high commissioner of Jamaica to the United Kingdom (UK), has urged Jamaican immigrants in Britain to vote for that country to remain in the European Union (EU).

Britons will today decide, in a referendum popularly referred to as Brexit, whether Britain should leave the EU.

"I think the Jamaican Diaspora in the UK ought to favour a stay campaign, which is more open to a broad approach to the migration issue," he said while sharing his personal views on the referendum with The Gleaner.

The fact that the Leave campaign, which has been fuelled largely by the anti-immigration sentiments of the euro-sceptic UK Independence Party (UKIP) and its populist leader Nigel Farage, poses a significant threat to the Jamaican immigrant community is one of the key reasons Whiteman believes British-Jamaicans should support the stay campaign.

"Any leaning towards an anti-immigration position or to protect England as it used to be - an England that is an island to itself - any move in that direction would not be helpful to Jamaica," the elder statesman said.

Whiteman argued that the Jamaican Diaspora in the UK should be wary of the leave campaign, given that it is likely to strengthen the anti-immigration position being championed by the UKIP.

Europe has been facing an acute migration crisis, which has seen migrants from war-torn countries in the Middle East and North Africa flee in droves to seek a better life in European countries. The massive inflow of migrants has threatened to destabilise already fragile economies, resulting in a wave of anti-immigration sentiments across the continent and calls for a suspension of the Schengen Agreement - the EU treaty that guarantees free movement across Europe.

The fact that these sentiments have been amplified by the UKIP should, according to Whiteman, give British-Jamaicans cause for pause when they cast their ballot in the referendum today.

Pre-referendum polls, which are being conducted up to the start of the vote, have the Leave campaign leading.

While he does not foresee a wholesale deportation of Jamaicans should the leave campaign prevail, Whiteman believes that immigration policies towards all countries, including Jamaica, would become more restrictive.

"If Britain leaves the EU, for reasons essentially to do with migration, then we could anticipate more restrictive entry policies for Jamaicans and other Caribbean nationals wishing to live in Britain. Already, access is quite regulated and bureaucratic even for visitors, but a Brexit vote could be seen as symbolic support for additional barriers to entry," he told The Gleaner.

A report, titled Brexit: The Commonwealth Dimension, published by British Influence in conjunction with Anthony Bailey Consulting, has noted that Brexit could damage the 53-member Commonwealth body in which Jamaica has membership.