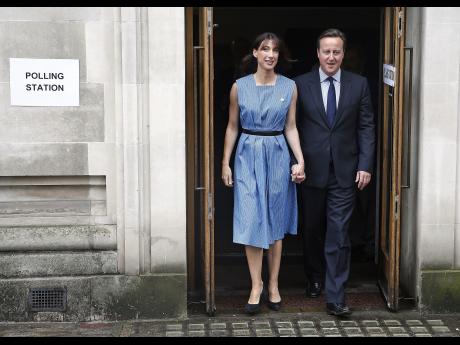 AP
Britain's Prime Minister David Cameron and his wife, Samantha, leave after voting in the EU referendum in London, yesterday. 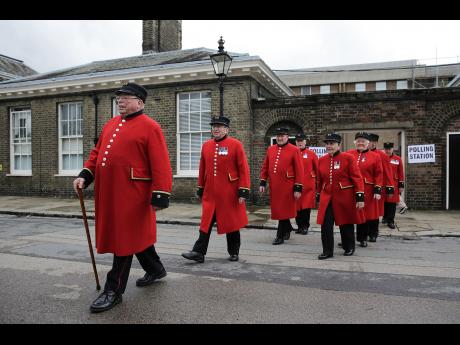 AP
Chelsea pensioners leave a polling station near to the Royal Chelsea Hospital, London, to vote in Britain's EU referendum yesterday. Voters in Britain were deciding whether the country should remain in the European Union in a historic referendum that threatens to undermine the experiment in continental unity that began in the aftermath of World War II.
1
2

Up to press time last night, there was no clear front-runner in the United Kingdom referendum to decide whether Britain stays with the European Union (EU) or severs ties, but the prediction was for a close result.

Last evening, The Gleaner sought comments from Opposition Spokesman on Foreign Affairs Dr Maurice Guy, who argued that the Opposition People's National Party was of the view that the British should remain with the European Union.

"We recognise that there would be changes in the immigration policy because if they leave, recall that their strongest argument is the influx of immigrants from the rest of Europe, particularly Eastern Europe."

Guy noted that if Britain voted to leave the EU, it would send a strong signal that the country would further tighten its immigration policy. "Certainly, it is already tight for Jamaicans entering, and to reside in Britain, it would be even tighter, so from that perspective, we feel it would be in Jamaica's interest if Britain stays in the European Union."

Withdraw would be silly

Professor Paul Miller, a Jamaican living in the United Kingdom, said he voted for Britain to remain in the European Union as it would make the UK stronger.

"I think in this day and age when you have various trading blocs right across the globe - CARICOM, NAFTA, Mercosur, and others - it would be very silly for the UK to withdraw itself from the European Union," he stressed.

Another Jamaican, Kerina Richards, who works in finance in the United Kingdom, said the decision was difficult, and so she only made up her mind yesterday.

She said the 'Leave' campaign failed to convince her, and so she voted 'Remain'.

However, realtor Ryan Wilson said he did not buy what he described as "scare-mongering" on the part of the 'Remain' campaign.

He said the campaign was not being honest, noting that he anticipated many severe consequences for the health service and the economy should the UK stay in the EU. He added that the UK was strong enough to go it alone.