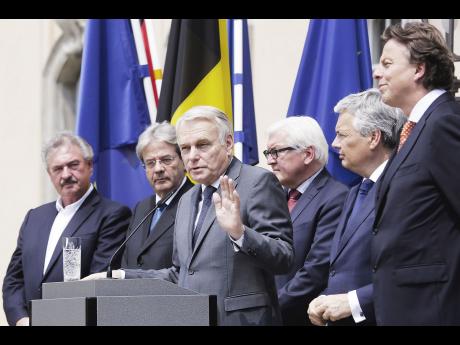 AP
The foreign ministers from EU's founding six brief the media after a meeting on the so-called Brexit in Berlin, Germany yesterday. 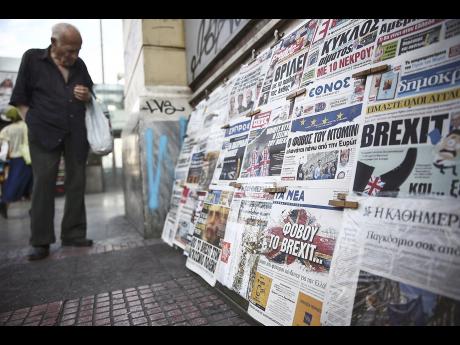 AP
A man browses through newspapers with the Brexit vote on their front pages outside a kiosk in Athens, yesterday. Britain and the EU haven't even begun divorce talks but they are already bickering, as political and economic shockwaves from the British vote spread around the world. 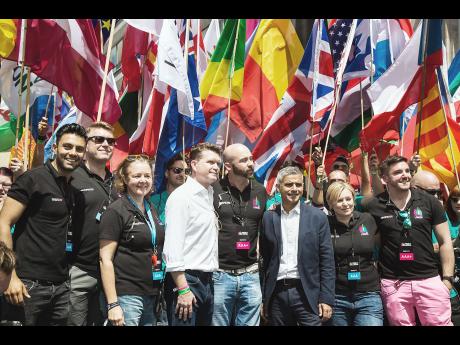 A British opposition lawmaker says Parliament should stop the "madness" and overturn the result of a referendum calling for Britain to leave the European Union.

Labour legislator David Lammy says last Thursday's national vote was non-binding and "our sovereign Parliament needs to now vote on whether we should quit the EU."

He says some "leave" supporters now regret their votes and Parliament should vote on Britain's EU membership.

"We can stop this madness and bring this nightmare to an end. ... Let us not destroy our economy on the basis of lies and the hubris of ('leave' leader) Boris Johnson."

Constitutional experts say Parliament cannot easily ignore the will of the people. Alan Renwick, deputy director of University College London's Constitution Unit, says "in legal theory that is possible. In practise, that is absolutely not possible."

The flags of European nations flew at the annual Pride in London parade, which ended with a rally in Trafalgar Square.

London Mayor Sadiq Khan told the crowd of thousands that Europeans in London are "our friends, our families and our neighbours."

Khan says "I recognise the huge contribution you make to our city, you are welcome here. I make you this promise as your mayor. That won't change."

Voters in London overwhelmingly supported staying in the EU, but a majority outside the capital voted to leave.

Belgian Georges Peters, who was flying his country's flag at the parade, said he was "very disappointed about the vote. I think this is bad for the economy and it's important that we stand together."

Antaine O'Briain from Ireland said he was "shocked and horrified" at the result of the Thursday's vote.

Britain, EU at odds over timing of divorce talks

The European Union wants a quickie divorce, but Britain wants time to think things over.

Senior EU politicians demanded yesterday that the UK quickly cut its ties with the 28-nation bloc a process Britain says won't begin for several months as the political and economic shock waves from the vote to leave reverberated around the world.

"There is a certain urgency ... so that we don't have a period of uncertainty, with financial consequences, political consequences," French Foreign Minister Jean-Marc Ayrault said at a meeting in Berlin of the EU's six founding nations.

EU Commission chief Jean-Claude Juncker warned that the split was "not an amicable divorce" but noted it was never "a tight love affair anyway."

Britons voted 52 to 48 per cent last Thursday in favour of ending their country's 43-year membership in the 28-nation bloc.

But no country has ever left the EU before, so no one knows exactly how the process will play out.

Britain must, at some point, unambiguously notify the bloc of its intentions and set a two-year clock ticking for negotiating its departure. Until then, Britain remains an EU member.

In contrast to the clamouring of EU officials, the leaders of Britain's "leave" campaign, who had reassured voters that the EU would offer Britain good terms for a new relationship, were largely silent yesterday.

England's 300-year-old union with Scotland could be another casualty of the referendum, since most people in Scotland voted to remain in the EU but were outvoted by a majority in much-larger England.

Scottish leader Nicola Sturgeon said yesterday that her semi-autonomous administration would seek immediate talks with EU nations and institutions to ensure that Scotland could remain in the bloc.

"(We will) explore possible options to protect Scotland's place in the EU," she said after meeting with her Cabinet in Edinburgh, adding that a new referendum on Scottish independence is "very much on the table."

Scotland voted in 2014 to remain a part of the UK, but that decision was seen as being conditional on the UK staying in the EU.

A tsunami of uncertainty has engulfed Anna Woydyla, a Polish restaurant worker in London, since Britain voted to leave the European Union.

Would her two teenage children, who grew up in the United Kingdom, still qualify for loans to study at British universities? Would she and her husband, after 11 years of working here, have to sell the home they just bought? Leave their jobs? Leave their new country? Try to apply for citizenship?

The 41-year-old is among hundreds of thousands of European Union workers in Britain who are fearful and confused over what happens next as their adoptive country begins the long process of unwinding its many ties to continental Europe.

"If it were just me, I could even return to Poland," a visibly tense Woydyla said as she stocked a bar in an Italian restaurant in London's Camden district. "But my kids are more English than Polish. They don't even want to go to Poland for their holidays anymore. They even speak to each other in English."

An entire class of cosmopolitan entrepreneurs, workers, students and strivers who have made the UK their home since Britain opened its borders to its EU neighbours now see their futures in limbo.

The immigrants changed the face of Britain, turning London's Kensington neighbourhood into a suburb of Paris, changing sleepy English towns like Boston into Baltic enclaves, filling supermarket shelves across the nation with Polish lager and Wiejska sausage.

"I personally cannot tell what's going to change for me," said Andrea Cordaro, a 21-year-old Italian student who compared the shock of hearing the referendum's result to the punch-in-the-gut feeling of flunking an exam. "I'll just have to keep my head up and hope for the best."