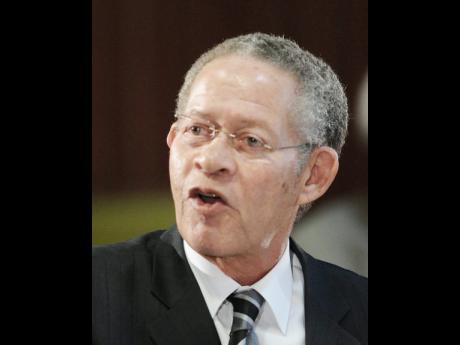 Former Prime Minister Bruce Golding is calling for stronger sanctions to curb what he describes as the "madness" on the nation's roads.

"The (traffic) ticket system not frightening anybody anymore," declared Golding as he addressed the Lay Magistrates' Association of Jamaica's Annual Banquet and Golden Scale Awards, held at The Jamaica Pegasus hotel in New Kingston on the weekend.

The former prime minister said he recently met with a team from the National Road Safety Council (NRSC), and he suggested that breaches on the road code become arrestable offences.

He also said that while chairing the NRSC during his tenure as prime minister, he was able to bring the (per annum) rate of road fatalities below the 300 mark.

"I met recently with the team from the NRSC about what measures are needed to bring this thing (road fatalities) under control, and I told them quite frankly that the ticket system not frightening anybody anymore," he reiterated.

"I think one of the things that should be considered is determining a limit above the speed limit, and if persons exceed that limit, this is not a ticketable offence, you are going straight to the police station. This is an arrestable offence," he argued.

Golding added: "I suggested to the road safety council that if you want to get some of those speedsters under some manners, because dem get used to the ticket now, but if a man knows that he is going to be taken to a police station, where he's going to appear before a lay magistrate and he's going to have to call his wife or call the brother to come bail him, then a lot of the madness that is happening on the roads would stop."

Earlier this year, it was reported that in 89 days, the number of persons killed on Jamaica's roads had already topped 100.

Up to May this year, the NRSC also said that 144 persons had died in 125 motor vehicle crashes.

In addition, last year, Jamaica recorded 380 road deaths, the highest for a single year in the last decade.