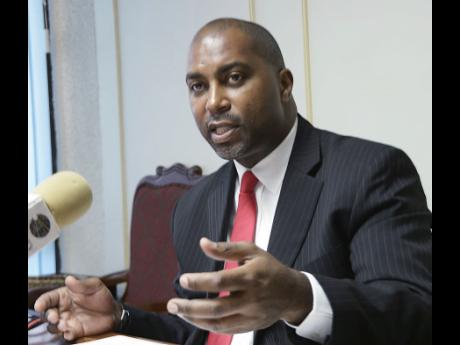 The National Executive Council (NEC) of the Opposition People's National Party yesterday ended an eight and a half hour meeting with partial acceptance of the report of the Julian Robinson-led committee, which conducted a post-election autopsy of the party's performance in the February 25 general election.

Robinson, who emerged at 6:50 p.m., said final adoption of the report is expected in July at another two-day meeting of the NEC.

"Yes, we got a lot of feedback. The approach we have taken is that we would allow the feedback. We will take the feedback from not just this NEC, but also from the regions as well and bring back a report to the July meeting of the NEC," said Robinson in a post-meeting interview.

He said the meeting took some time to be completed because there were a number of issues to be discussed.

"We had the elections, and the local government campaign, among other issues to discuss. We allowed a lot of latitude with the discussions, so the people felt free to raise the issues they came prepared to discuss," he told The Gleaner.

The meeting brought out many party stalwarts, young and old.

Many emerged at varying times throughout the day, attempting to shake fatigue after sitting for hours.

Robinson, too, was tired.

"I would like to go home and see my son before he goes to bed. But all in all, it was a very good meeting and the tone was a frank one," he said.

General Secretary Paul Burke said about 70 per cent of the membership attended, although not all in the room at the same time.

"Organisational issues, the local government campaign, and other political issues were discussed," he also told The Gleaner.

However, the meeting was not without drama.

Karl Blythe, the former vice-president and party leader aspirant, in his contribution to discussion of the appraisal committee report, told Simpson Miller she should consider a departure timetable.

Blythe's suggestion found some resistance from a small group inside with shouts of "no, no, no".

When word of Blythe's suggestion reached outside, a group of non-executive members verbally attacked the messenger.

"Go home, where? Look how long Seaga was Jamaica Labour Party (JLP) leader. Anybody did push him out? Is Portia bring di whol' a unu into politics. Mek shi leave when shi ready," said one woman whose voice was loudest.

There was loud laughter, however, as someone chimed in that "Seaga had to be pushed out and away".

There was also disagreement among members on some of the committee's findings.

Former General Secretary Peter Bunting has already signalled his intention to seek the presidency of the party; however, supporters of former vice-president Dr Peter Phillips believe that it is his time to assume the reigns of the PNP.

Phillips is currently the party's point man on economic and governance issues.

Robinson said he would not comment on the issue of Blythe's call for Simpson Miller to step down.

The party president, in March, appointed Robinson to evaluate the PNP's performance in the February 25 general election.

In December 2011, the party won 42 of the 63 seats it contested, and four years later, finished in opposition with 31 seats.

The meeting, which was held at the University of the West Indies School of Engineering Lecture Theatre, saw a large turnout of members and a small following of noisy supporters.