'Too much garbage' - Local, foreign soldiers decry state of waste management in Jamaica 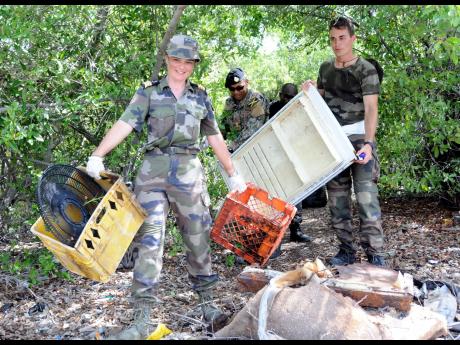 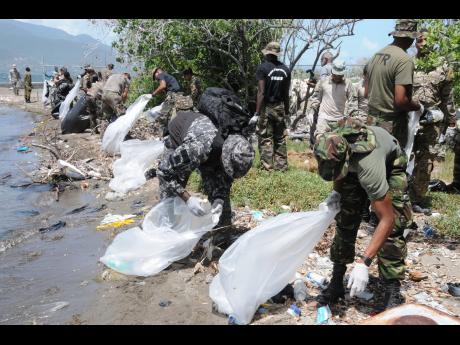 Jermaine Barnaby
Soldiers picking up plastic bottles during the clean-up operations. The National Environment and Planning Agency, National Solid Waste Management Authority, and The Ministry of Health were partners on the project. 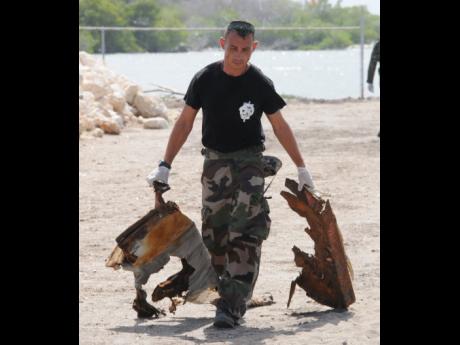 Corporal Esan Thompson of the Trinidad and Tobago (T&T) Defence Force is recommending that Jamaican authorities responsible for garbage disposal install larger numbers of garbage bins throughout the Corporate Area and in rural communities as well.

Thompson said such a move would contribute to a reduction in the number of plastic bottles and other forms of garbage that find their way into the sea, and, eventually, back on the island's shores.

The T&T soldier, who is part of the T&T group participating in the Exercise Trade Winds Maritime and Land Security Training Exercise said that based on his observation of the coastal area he was assigned to help clean (along the Palisadoes Road), the waste-management situation in Jamaica leaves much to be desired.

"The observation is that it is very poor. You could say a hazard to the environment, to the plants, to the water and to the soil itself. (There is) too much garbage you all have to deal with at this time," Thompson said.

"My suggestion is that in the town areas and in the rural areas, you all could put (more) bins so that on every corner, every step you make, there are bins to prevent the garbage from coming down here (on the beaches). You could also (put together) an organisation where people can come as a group and clean the (beaches) for a day's pay (on a regular basis)."

An excessive number of plastic bottles and other types of debris were removed from a number of coastal areas in Kingston, St Catherine, and St Ann yesterday.

Soldiers from 17 countries, including Jamaica, Barbados, Mexico, and Trinidad and Tobago participated.

The Jamaica Defence Force's Civil Military Corporation and Media Affairs Officer, Major Basil Jarrett, who was also involved in the clean-up exercise, said the country needs to take a more proactive approach to tackling the problem of poor waste management.

"The beaches get particularly dirty in the rainy seasons because as the rain brings the garbage from the gullies, it deposits it into the sea and it eventually makes its way back to the shore. Unless we routinely clean the beaches, in about four weeks, we could be back at this level, so it's really everyone that has a role to play in keeping the beaches safe and clean.

He continued: "One very proactive thing that people can do is to not throw plastic bottles into their regular garbage. They ought to arrange for it to go in the recycle bin because plastic bottles, as you can see, comprise a large amount of the debris that you find on the beach. If we can just make it a habit to discard our plastic bottles in recycle bins or in bags where they can be recycled, that will help to diminish the impact on the beaches."