Pressure on Portia - Analysts urge rivals not to fear challenge 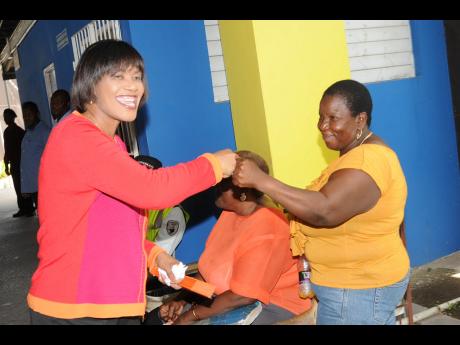 Jermaine Barnaby
Leader of the Opposition Portia Simpson Miller (left) knocks fist with a comrade as she makes her way to the People's National Party National Executive Council meeting at University of the West Indies on Sunday.

Political commentators have signalled that it is time that Jamaica's political parties unshackle themselves from the fear of challenging for the leadership of their parties, noting that the constitutions of both organisations have embraced competition for the top job at annual conferences.

Kevin O'Brien Chang, political analyst, has encouraged Jamaicans to take careful note of the developments that are taking place post Brexit. He said on the one hand, British Prime Minister David Cameron has said he would step down, having supported the 'Remain' campaign, while Labour Party leader, Jeremy Corbyn, who also pushed for the United Kingdom to stay with the European Union, is under tremendous pressure from forces within his party who will be challenging him for the leadership of the party.

"It's transparent; people are speaking their opinions; it's part of the democracy; you can challenge your leader; it's everybody's free will. Why in Jamaica everyone has to be so secretive?"

"Why should anyone be afraid to challenge Mrs Simpson Miller openly? She has no God-given right to (be president)."

He said political parties in Jamaica should study what is going on in the Labour Party in Britain and adopt that type of vigorous, open transparency that is on show.

"It's a very healthy democratic process, and that is where I would like to see Jamaica go."

Chang also said that Simpson Miller, by opting for re-election, was acting within the bounds of democracy, noting that she could make the decision to stay or leave. "It is within her right."

Political commentator Martin Henry has pointed to a serious reluctance on the part of second-tier leadership in Jamaican politics to offer themselves for top leadership although the constitutions of both major political parties allow annual competitions.

"I can't fault Simpson Miller for wanting to continue as president of the party. What I would fault an entire party for is not pushing for at least the prospect of renewal by having several other persons making themselves available for the contest."

Peter Bunting, who had signalled that he had ambitions to lead the PNP, had drawn some negative flak from the party, according to Henry. "I found that very surprising, because he didn't say, 'I am about to contest.' He said, 'Of course I have ambitions to lead,' and I don't see why every single card-carrying member of the PNP should not have similar ambitions. This is a moment for the ambitious to yield their hand."

At a National Executive Council meeting of the PNP on Sunday, former vice-president Karl Blythe came under fire from a group of persons at the session when he said Simpson Miller should consider a departure timetable.

Henry contended that it was unfortunate that within the parties and across the country, many see a challenge as a betrayal and not a fair, open, democratic competition.

Meanwhile, the PNP issued a statement last night saying that nominations will open for the positions of president and vice-presidents from Wednesday, July 13, at 10 a.m., to Wednesday, July 20, at midday.