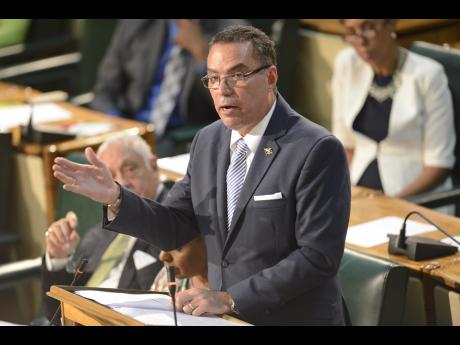 Consideration is being given to an investment package worth more than $800 billion with the potential to create more than 80,000 jobs, Daryl Vaz, minister without portfolio in the Ministry of Economic Growth and Job Creation, has said.

But already the Jamaica Confederation of Trade Unions (JCTU) is warning Jamaicans not to get too excited.

"We are looking at several investment projects which will include public and private partnerships that span several sectors," Vaz announced yesterday in the House of Representatives during his contribution to the Sectoral Debate.

But Vaz, one of three ministers in the superministry headed by Prime Minister Andrew Holness, said that it will not be easy to roll out all the jobs. He said the view was supported by an assessment of projects which fall under the ministry.

"This ministry is faced with the unique situation of having too many economically viable projects stuck in the pipeline," Vaz said.

To fix those issues, the Government is mooting an adoption of what successive administrations have done to remove barriers.

"We aim to get these projects off the ground while we redouble our efforts to attract new investments," Vaz said to heckling from opposition benches about the realistic chances of fulfilling the pledges. He responded to one of the comments, saying he always ensured he has his backers when he makes announcements.

Many of the jobs will be coming from the business process outsourcing (BPO) sector, which a Gleaner exposÈ highlighted earlier this year as being in need of tighter regulatory oversight.

Vaz said that 20,000 jobs are expected with the creation of the Naggo Head Technology Park in Portmore, St Catherine. He said $14 million is to be spent on ongoing infrastructural work on Phase One of the project. Infrastructure work for the entire park is expected to cost $180 million.

Seventeen thousand jobs are expected when building space for the BPO sector is completed. The Development Bank of Jamaica (DBJ) is funding 11 of the projects through loans totalling US$56 million.

For this year, the DBJ is expected to provide US$20 million which will add an additional 4,000 jobs.

JAMPRO projects investment in the BPO sector to be over US$50 million, Vaz announced.

However, Helene Davis Whyte, vice-president of the JCTU, says Jamaicans have to be "cautious" about Vaz's announcement because "as a country we have heard promises of job creation [before]".

"Most of us have become weary of these specific numbers, especially when the numbers are as large as have been announced. There's so much that has to be done that we have to watch very carefully. This is not the first time. The former administration has said it before," Davis Whyte told The Gleaner.

"I would be very happy if it can be realised (but) we are very cautious when it comes to announcement.