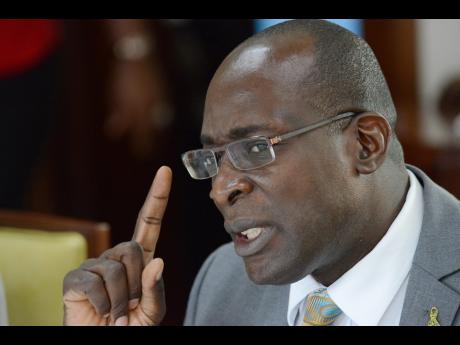 File
Senator Ruel Reid, minister of education, youth and information, speaks at the Editors’ Forum at The Gleaner in Kingston yesterday.

Minister of Education Ruel Reid has rebuffed suggestions that the efforts by the ministry to ensure that schools adhere to the new policy of abolishing auxiliary fees while asking for reasonable contributions from parents have stifled opportunities to introduce initiatives that improve the teaching and learning process.

While conceding that the issue had dominated public discourse, Reid was adamant that the ministry had not been solely focused on issues relating to fees.

"Clearly, there are stakeholders who have vested interest who have kept it on the front burner for other reasons that I am not absolutely sure of. We announced, and we went around the island and had a number of consultations, but it has been a very dominant issue," he said.

Permanent Secretary in the education ministry Dr Maurice Smith supported the assertions of the minister and noted that the ministry had continued to perform its other duties while putting the mechanism in place to implement the policy of abolishing auxiliary fees.

In his view, the issue of the fees has been enjoying public attention because it is a new approach to education policy.

"The minister is responsible for policy, and I think the minister has been doing a fantastic job of articulating that policy. Why it has been enjoying much of the public attention is because it's new, the approach is new, and so it has come with much interest because it concerns administrators, the ministry, boards, parents, teachers, and it concerns money," he explained to the forum.

According to Reid, the issue of the fees has taken on a political life of its own given that the new policy of abolishing auxiliary fees could influence electoral outcomes.

"I have found over the years, though, that the whole business of education and the funding of education has become a very big political issue to the extent that if you are giving a service now that people don't have to necessarily pay for in any mandatory way, it could be a potential benefit that influences voting, so, therefore, if that is what is on the table, both parties, politically, are going to cross swords on it, and so it's a big political issue," he said.