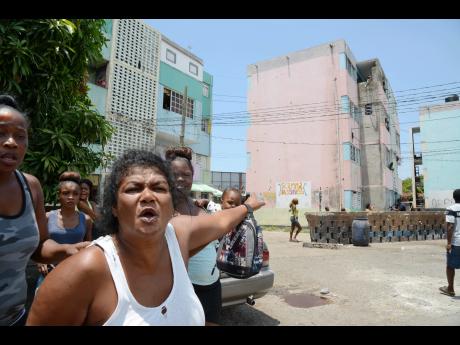 File
In this file photo, residents of Tivoli Gardens sought to get the attention of the commissioners and lawyers of the enquiry, who toured the community.

Amnesty International has thrown its full support behind the just released report of the West Kingston Commission of Enquiry and is demanding that the Jamaican Government immediately detail how it plans to implement the recommendations put forward.

On June 15, the three-member committee published a detailed, approximately 900-page report (including annexes) of its findings from the commission of enquiry that was convened to investigate the events that took place in May 2010 in west Kingston when the security forces went in search of Christopher 'Dudus' Coke.

According to a statement from Amnesty International, "What followed was the large-scale loss of lives and some of the most grave human-rights violations seen in the English-speaking Caribbean in recent history." The group said that following the operation, it joined several other human-rights organisations in calling for a commission of enquiry.

The operation resulted in the death of approximately 70 civilians, mainly in the Tivoli Gardens community, before Coke was captured days later and extradited to the United States.

Stating that the economic cost to Jamaica from the joint police-military operation was estimated at more than US$258 million, the report from the West Kingston Commission made a number of significant recommendations for moving forward, including compensating victims, offering an official apology, and a suggestion against certain members of the security forces being allowed to lead such operations in the future.

In supporting the commissioners' report, Amnesty International said it provided numerous lessons for the Government of Jamaica and made many important recommendations. The watchdog group put forward 10 critical recommendations of its own that it urged the Government to implement to ensure that such a tragedy never happens again.

Among them, the international human rights watchdog called on the Government to ensure special external oversight of the Mobile Reserve and review its internal accountability, based on reports of its role in the operations.

"Most of the police alleged to be involved in extrajudicial killings during the state of emergency belonged to the Mobile Reserve. According to INDECOM (Independent Commission of Investigations) data, for the 15-month period between January 2015 and March 2016, the Mobile Reserve was involved in 44 per cent of police killings arising from planned operations. It is clear this unit requires special reform and oversight," the statement said.

Cautioning against any future use of mortars, which the commissioners stated were used by the security forces in the operation, Amnesty International noted that Jamaica must also address the policy gap in relation to its selection of weapons systems that can be used in security operations, ensuring that the policy is consistent with human rights law.

The statement said: "The use of mortars in an urban community is clearly disproportionate to the target and, therefore, contrary to human rights law. May 24, 2010, was the first time that mortars were used by security forces in any operation in Jamaica. Thirty-seven rounds of mortars were used in total. After initially denying their use, the JDF (Jamaica Defence Force) argued they were used in open fields to 'disorientate' gunmen and keep women and children inside. An independent expert appropriately described the use of mortars in a populated urban environment as 'irresponsible and reckless'."

Amnesty International emphasised: "Jamaica should also promptly adhere - without making any reservation - to the fundamental human rights treaties, including the Convention Against Torture and Other Cruel, Inhuman or Degrading Treatment or Punishment; the Second Optional Protocol to the International Covenant on Civil and Political Rights; the Convention on the Non-Applicability of Statutory Limitations to War Crimes and Crimes Against Humanity; the International Convention for the Protection of All Persons From Enforced Disappearance; and the Rome Statute of the International Criminal Court, among others," the statement said.

Amnesty International's 10 recommendations to the Jamaican Government are:

1. Insist on a radical new culture in the operations of the security forces.

4. Ensure special external oversight of the Mobile Reserve and review its internal accountability.

5. Apologise to the residents of Tivoli, including the thousands of young men arbitrarily detained.

6. Never allow mortars to be used again in Jamaica.

9. Dismantle garrison communities by ensuring they benefit from services and protection provided by the State.

10. Publicly reply to the report and indicate the steps it intends to take to implement its recommendations.