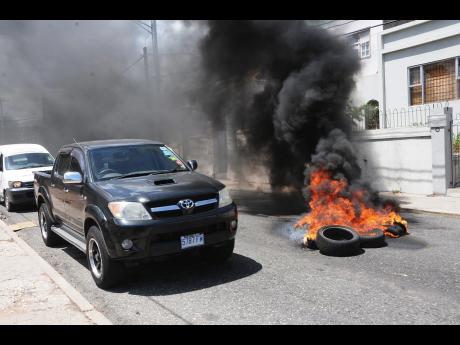 Jermaine Barnaby
Vehicles passing a fire along East Street in Kingston yesterday, after the shooting of a schoolgirl.

Gregord O'Conner, driver of a robot taxi in which a 15-year-old second-form student of the Convent of Mercy Academy (Alpha) was travelling when she was shot in the head, allegedly by the police, has described the incident as a "wicked act".

He said that they should be weeded from the force.

"It's so unbecoming and unfortunate. It's a wicked act! Broad daylight, some minutes after seven. School pickney on board and yuh fire inna di vehicle? Dem need fi weed out!" O'Conner said.

The child was on her way to school in the robot taxi when she was shot yesterday.

Later in the afternoon, the fire brigade had to be called in when news circulated that she had died and members of the public lit fires in sections of downtown Kingston, including East Street and North Parade. However, she was admitted to hospital, where she had been taken by the taxi driver. Reports are that she underwent emergency surgery.

Commissioner of Police Dr Carl Williams has ordered the Criminal Investigation Branch and the Inspectorate of the Constabulary to commence an immediate investigation into the incident.

Superintendent of Police Stephanie Lindsay told The Gleaner yesterday that information surrounding the incident was limited and she was, therefore, appealing to witnesses to come forward with what they knew.

"I don't have a lot of information at this time. We are able to confirm that there (was) a shooting incident in the downtown area. The police are alleging that men dressed in blue, similar to that which is worn by the members of the JCF (Jamaica Constabulary Force), fired shots on a vehicle in which a child was injured. We are still trying to find out if we had any police officers in that area."

"Most of the information we are getting is by way of the media. So we are encouraging eyewitnesses to this matter to make themselves available to share whatever kind of information they have so we can find some closure to this matter. We really want to know exactly what transpired this morning (yesterday)," Lindsay said.

O'Conner said that he was in downtown Kingston picking up passengers and the schoolgirl was the last passenger to enter the vehicle.

His said a heavily tinted Hiace bus gave him a "bad drive" while he was on North Street. He said he used expletives. The sliding door of the bus opened and he was asked by one of the men in the bus, "How yuh a deal wid police suh?"

He said he did not argue further after realising that it was the police. Upon reaching the intersection of Mark Lane and North Street, the men, dressed in police attire, alighted from the vehicle with guns. He said he turned on Mark Lane and the car was fired upon and the female student hit.

INDECOM has since launched an investigation into the matter. In a press release, it said that the matter had been reported to them by the taxi driver. A team of investigators processed the scene and the motor car in question. INDECOM investigators also collected statements from witnesses.