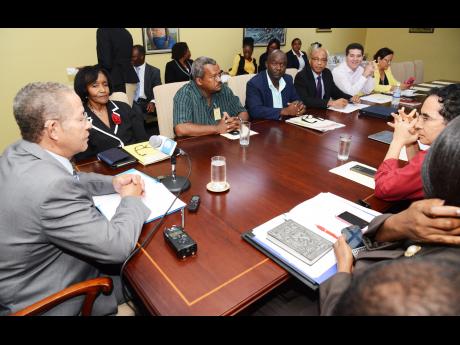 Rudolph Brown
Bruce Golding (left), chairman of the CARICOM Review Commission, speaks with members of his team during the body's first meeting at the Ministry of Foreign Affairs in St Andrew yesterday.


Chairman of the 18-member Commission to review Jamaica's relations within the Caribbean Community (CARICOM) and African, Caribbean and Pacific (ACP) CARIFORUM is guaranteeing that he and his members will not enter into the discussions with any predetermined positions.

This is despite him and other members of the commission having stated openly in the past that the CARICOM, as it is currently structured and operating, is not functioning appropriately.

“We are not approaching this discussion with any predetermined ideas. I think the members are open to looking at all the perspectives of CARICOM,” Golding said during the commission’s first meeting at the offices of the Ministry of Foreign Affairs yesterday.

“I don’t think you are going to find us being stuck on any hard line position being held.”

Commission member, William Mahfood, who is president of the Private Sector Organisation of Jamaica, did not shy away from the fact that he has negative views towards CARICOM, but said he would be pleased if solutions can be identified.

“The reality is that my own views for the long term have been that CARICOM has failed in terms of its real integration for the people of the CARICOM and Jamaica especially,” Mahfood said.

“I think that this now will give me maybe a better forum to share my views in a meaningful way and hopefully have an outcome and a set of recommendations that will improve the way forward for us as a region.”

Golding said he believed that, with Jamaica having been a part of the CARICOM for the past 43 years and it being 15 years since the last significant review of the Treaty of Chaguaramas, an assessment was due.

Prime Minister Andrew Holness has mandated the commission to submit its findings by December.

“One of the important things that we did at the first meeting is that we broke the commission into four groups each charged with the responsibility of looking at specific areas,” Golding said.

He added: "We have to look at the wider Caribbean and what are the opportunities there for economic relationships that go even beyond CARICOM. And it is going to be important as well to look at the CARICOM mechanisms, because this is a major problem. How decisions that are taken implemented and enforced, how are disputes resolved?”

Golding however stated that the extent to which Jamaica has taken advantage of the opportunities in CARICOM, and how its own policies and actions may have caused it to be the victim rather than the beneficiary of CARICOM, will have to be examined.

“We are going to be inviting submissions from the public, because I think it is important for us to know what the ordinary Jamaican citizen feels about CARICOM and what do they think and how can that inform us on the way forward,” Golding said.

“I want for us to engage consultations with a number of persons here in Jamaica and throughout the CARICOM region who have had experience in working this process; some of who were involved in the very formation of CARICOM.”

Deputy chairman Dr Nigel Clarke, who is also deputy chairman and chief financial officer at Musson Group of Companies; Dr Damien King, co-executive director of Caribbean Policy Research Institute; and Christopher Levy, president and chief executive officer of Jamaica Broilers Group Limited, were absent from yesterday’s meeting as they were off the island.

The next meeting of the commission is scheduled for next Tuesday.