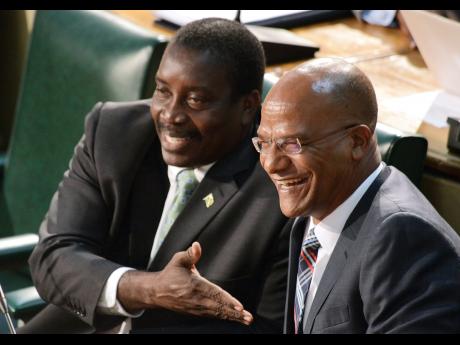 Rudolph Brown
Robert Montague (left), minister of national security, speaks with his opposition counterpart Peter Bunting in Parliament on Wednesday. Bunting said yesterday that despite increasing murders in sections of the island, he would not call for Montague’s resignation at this time.

Opposition spokesman on National Security Peter Bunting yesterday said that despite the worrying increase in murders, particularly in western Jamaica, he would not be calling for his counterpart, Robert Montague, to be sacked at this time.

"It is too early to go for such a call in my view," Bunting said during a press conference yesterday at the People's National Party headquarters on Old Hope Road in St Andrew.

However, Bunting told journalists that he was disappointed that after four months in office, the national security minister had not brought to the table something more tangible in terms of addressing the crime problem.

Montague told Jamaicans on Wednesday that the Government intended to put billions of dollars of resources over the next three years into shoring up the national security apparatus to more effectively tackle crime.

Yesterday, Bunting said he wanted to know how much resources the Government would put into national security over what was originally budgeted.

He has also asked Montague to tell the country from which source the additional financing would be found.

The opposition spokesman said that by now, the minister should have been properly briefed and have a grasp of what is required to respond to the situation facing the country.