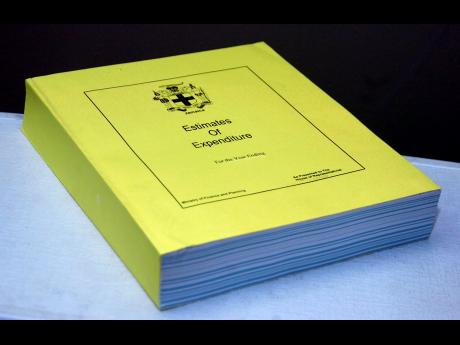 File
A copy of the Estimates of Expenditure

Declaring that it was time to make tough choices, National Security Minister Robert Montague has revealed that he is now taking steps to have the budgetary allocation to his ministry kept from the public.

Yesterday, Montague announced that he would be asking Cabinet to green-light his plan to have the budget for the Ministry of National Security excluded from the printed version of the national Budget.

The plan has, however, been shot down by former National Security Minister Peter Bunting, who argued that there is no good reason or justification to attempt what he described as an unprecedented move.

Bunting, the opposition spokesman on national security, said such a move would take scrutiny of the ministry's budget from the purview of the people's representatives.

"If there are sensitive areas that could reveal some capabilities or operations that would not be in the public's interest, we can refer those to a small subcommittee of the Standing Finance Committee," he suggested.

But seeking to explain the unusual move, Montague revealed that the national security ministry had seen, on its website, "a lot of traffic from countries and organisations" trying to find out the size of its budget and the areas where spending is being directed.

He described it as an intelligence-gathering exercise and confirmed that among the entities making enquiries are criminal organisations in which Jamaican law-enforcement authorities "have an interest".

"We are providing those who wish to cause mayhem with vital information. The days of innocence as it relates to crime are over ... we are under attack," he told journalists during a press conference at his St Andrew offices.

"When you have persons scouring your website and wanting to find out the details of what you spend on some critical national-security apparatus, we have to pause. We are on the doorstep of the United States. We are not immune to terrorism, and we have to begin to take the necessary steps to protect our citizens," Montague underscored.

Questioned about potential transparency and accountability issues, the national security minister was unmoved, announcing that his plan would be implemented once Cabinet gave approval.

"Let me be absolutely clear. This minister will not be informing the criminal elements of the strategies to catch them," he said.

"If I will be condemned for it, so be it, because if I don't catch them, I'll be condemned by the public anyway. So I have a choice to make, and I am making the tough choice," Montague insisted.

He acknowledged that the Government has a responsibility to inform citizens "as much as we can" about security measures being implemented to deal with criminality but said it was more important that they see the effects of the strategies.

However, Montague said citizens would be kept up to date through regular engagement with the media and meetings with stakeholder groups.