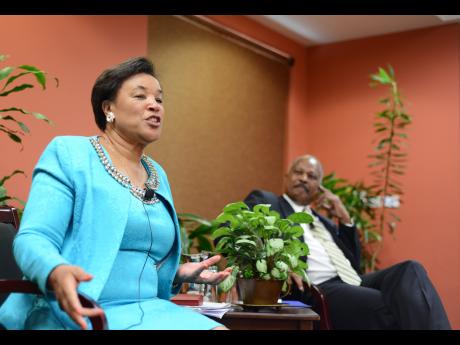 Gladstone Taylor
Commonwealth Secretary-General Baroness Patricia Scotland addresses the gathering at a town hall held last Friday at the regional headquarters of the University of the West Indies in St Andrew while UWI Vice-Chancellor Sir Hilary Beckles looks on.

The Commonwealth, a global organisation of mostly ex-British colonies, has pledged to support the advocacy of the Caribbean Community (CARICOM) against large banks in Europe and the United States ending relationships with local financial institutions without considering the consequences for the regional economies.

The pledge of support from Commonwealth Secretary General Baroness Patricia Scotland came days after CARICOM leaders at a summit last week said their economies faced an "existential threat" with the ending of correspondent banking relationships (CBRs).

Correspondent banking involves banks in much larger countries, typically based in North America or Europe, facilitating transactions for local banks that do not offer certain services.

But the big banks are ending the relationships as part of their efforts to conform to international regulations and to safeguard their reputations against allegations of facilitating financial crimes.

Scotland, speaking last Friday during a town hall at the regional headquarters of the University of the West Indies in St Andrew, said her organisation was prepared to help the countries of the region, which, because of the high dependence on inflows such as remittances and foreign direct investment, could see their economies derailed, with poverty and unemploy-ment increased.

"The Commonwealth is here to help and support and to be an advocate for the small and vulnerable countries," she said.

The Commonwealth is made up of 52 members, of which 31 members are small states.

Scotland reiterated that countries are being affected because of the "unintended consequences" of banks' actions to de-risk to save their reputations.

"I've spoken to Christine Lagarde (managing director of the International Monetary Fund), the World Bank, the United Nations, and others about the unintended consequences of the rules that have been implemented to stop money laundering," she added.

"So what has happened is that by virtue of the banks deciding that they do not wish to continue to provide succour for the money lenders who have been looked on by many as money launderers - whether that's right or wrong - it's the risk."

But she is agreeing with regional leaders that banks cannot simply end relationships where a country's development could be significantly compromised.

CARICOM leaders at their Guyana meeting argued that they have been compliant with international financial regulations and should not be punished.

They also said the issue should have the input of political leaders of countries where the large banks are hosted, given the developmental impacts for affected countries.

CARICOM has announced that it will be hosting a global conference on the issue later this year.

Despite discussions with the US State Department and Treasury, the leaders say they will be engaging a US-based lobby to help in advocating to Wall Street and Washington.

The regional bloc says at least eight financial institutions in Barbados, seven in Jamaica, five in Belize, and others in Antigua and Barbuda, Montserrat, and other member states have been affected by the termination or restriction of CBRs.

According to the Jamaica-based think tank Caribbean Policy Research Institute, the fallout from debanking could significantly harm countries like Jamaica, where remittances accounted for about 15 per cent of gross domestic product over the period 2000-2013 .