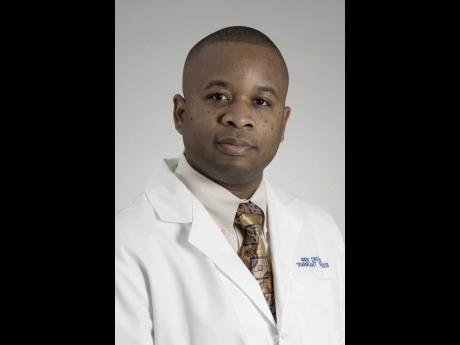 Contributed
Dr André Dick: I did poorly at CSEC. To this day, when I talk to people and they say, 'You seem so successful', I tell them that it has come from multiple failures along the way.

Performance in Caribbean Secondary Education Certificate (CSEC) exams can limit one's ability to advance professionally, but Dr André Dick, associate professor of surgery at the University of Washington Medical Center and Seattle Children's Hospital, was given a new lease on life when he migrated and decided to turn around his academic performance.

"I did poorly at CSEC. To this day, when I talk to people and they say, 'You seem so successful', I tell them that it has come from multiple failures along the way and, after CXC (Caribbean Examinations Council), I said to myself there is no way I can continue this way; and so the fear of failure drove me to where I am today," he told The Gleaner.

His first year in the United States was a miserable one, as he could not get into any school to pursue his dream of becoming a doctor, but once he gained acceptance to the State University of New York (SUNY) at Buffalo, after doing the Scholastic Assessment Test, he was determined to excel.

ON HIS WAY TO SEATTLE

After medical school at SUNY, he took a keen interest in paediatric surgery and was encouraged to consider specialising in paediatric transplants by one of his mentors.

After completing his residency at Penn State University Hospital, he applied for a fellowship in the transplant division of the University of Washington School of Medicine. It is from here that he got involved with the Seattle Children's Hospital and honed his skills in paediatric transplant surgery.

What was suppose to be a two-year fellowship has turned out to be a 10-year career at the children's hospital.

He was recently appointed as the director of kidney transplant at the hospital.

"Now I spend most of my time in the children's hospital and it is very rewarding giving kids a new lease on life ... . They have their whole lives ahead of them and it's pretty amazing," he said.

"As the director of the kidney transplant programme, I work with a medical director and together we look at candidates for transplant, and after the operation, manage the cases together. I also have to make sure that all the regulations are met and that we are in compliance with the rules," he said as he explained his new role at the hospital.

Armed with a Masters of Public Health from Harvard University, Dick has continued to train medical students at the University of Washington, and now plans to increase his academic research in the area of kidney transplants.

He also plans to contribute to improving transplant services in Jamaica.

While confessing that it has been difficult to balance his teaching and research duties alongside his obligations at the hospital with his family life, the father of two young children says he has remained grounded by the lessons learnt from childhood in Jamaica.

"I keep in touch with a lot of my classmates from Wolmer's because those were some of the best years of my life. The Wolmer's motto - 'Whatever you do, do it to the best of your ability' - has stuck with me the whole way," he said.