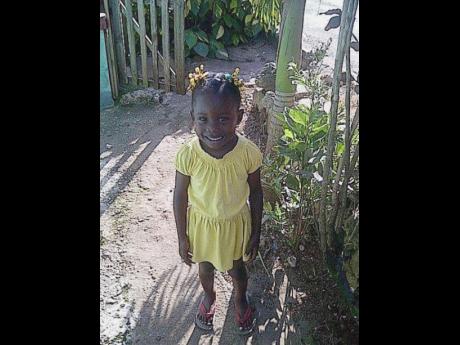 As the police revealed yesterday that a person of interest had been held and the mother of three-year-old Nevalesia Campbell is to face charges of neglect under the Child Care and Protection Act, Prime Minister Andrew Holness said he was monitoring investigations into the murder of the infant girl from Orange Hill in Brown's Town, St Ann.

"The Government is clear and adamant that we will do whatever we can to deal with these gruesome and indecent acts, especially against our women and children," Holness said in a statement yesterday.

"This is a sincere commitment by myself and our Cabinet. I understand that good progress is being made in the investigation and I believe this is one case where the perpetrator or perpetrators will not get away."

Holness' comments came hours before person of interest Alexus Newland, otherwise called Dal Dal of Milford in Ocho Rios, St Ann, turned himself in. The police said they found bloody clothes they believe belonged to Newland, as well as what they theorised to be the murder weapon.

Yesterday, investigations also revealed that Nevalesia and her twin brother were left alone at home by their mother before the little girl was killed.

Superintendent Gary Francis, acting commander for the St Ann police, said the mother's common-law husband, who is not the child's father, was also to be charged.

The child's twin is currently in the care of his grandmother.

This contradicts a statement the mother gave the police earlier that she went to bed with her children Saturday night and, upon awakening around 1:30 Sunday morning, realised that her daughter was missing.

A police search team found the little girl's body in a gully with chop wounds on Sunday, several hours after the mother had filed a missing-person report.

Francis is appealing to persons who may have information about the case, or any similar situation in Jamaica where a child may be at risk, to report the matter to the police.

"Don't let somebody else die before you say something," he urged.

"If you know of any situation wherein a child is being neglected, abused, or has been abandoned, or of any act of criminality against them, you have a duty to report the matter to the police."

At the same time, he sought to assure persons who might be unwilling to make such reports that there is no consequence, even if investigations later fail to find proof of the allegations.

In his statement, Holness noted that Olivia Grange, minister in charge of gender affairs, will give a statement, during her contribution to the Sectoral Debate today, on issues related to gender-based violence.

"Minister Grange will be updating the nation on the delayed joint select committee to recommend amendments to the Offences Against the Person Act, the Sexual Offences Act, the Domestic Violence Act and The Child Care and Protection Act," he said.