Laws to be strengthened to punish child killers - Grange 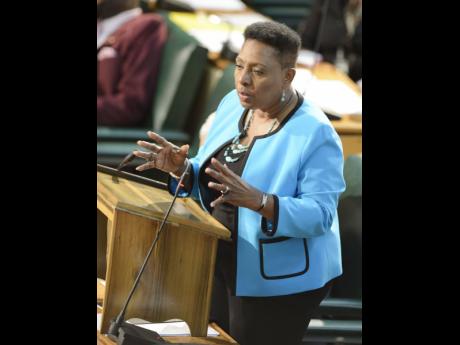 File
Olivia Grange, minister of entertainment, sports, culture and gender affairs, makes her contribution to the Sectoral Debate in the House of Representatives yesterday.

The gruesome killing of three-year-old Nevalesia Campbell in Brown's Town, St Ann, last weekend has spurred the Government and, by extension, lawmakers into action with an urgent commitment to revisit three critical pieces of legislation geared at effectively punishing persons who carry out heinous crimes against women and children.

Olivia Grange, who has portfolio responsibility for gender affairs, told members of the House of Representatives yesterday that the horrific slaying of the child has strengthened the resolve of the administration to move swiftly to ensure that the work of a joint select committee to review the laws begins in the next quarter of the parliamentary year.

This means that one of the first orders of business that lawmakers will attend to after they return from the summer break is to complete the work of a joint select committee which will consider amendments to the Offences Against the Person Act, the Sexual Offences Act and the Child Care and Protection Act.

The original intent of the review was to "redefine or augment, as appropriate, offences and punishments that would be applied to persons convicted of killing a pregnant woman; murder of children; sexual offences against children; the abduction of children and such other violent crimes perpetrated against women, children and the elderly".

Said Grange: "When you harm the innocent, the weak and the vulnerable, you must feel the full brunt of the national law-enforcement apparatus."

A joint select committee was established in 2014 to consider amendments to the Offences Against the Person Act, the Sexual Offences Act and the Child Care and Protection Act.

However, the committee's deliberations stalled and eventually ended prematurely with the dissolution of Parliament in February 2016.

Grange shared with her colleagues that statistics from the Jamaica Constabulary Force indicate that only a small percentage of persons who are victims of gender-based violence seek help.

Giving details, she said only 28 per cent of those victims make a report to the police, seven per cent to a health-care provider, and three per cent to the church.

"This needs to change and change quickly," she added.

The minister in charge of gender affairs acknowledged the efforts of Education Minister Ruel Reid and the Child Development Agency in rallying around the community in Brown's Town where the child was slain and for providing welfare and other support for her twin brother.

A person of interest has been held by the police, and Nevalesia's mother and stepfather have been charged in relation to allegations of neglect under the Child Care and Protection Act.

In her comments, Lisa Hanna, opposition youth spokesman, urged the Government to take to Parliament legislation that has already been crafted to deal with persons who commit crimes against children.

She also called for the administration to implement the national plan of action as it relates to violence against children.