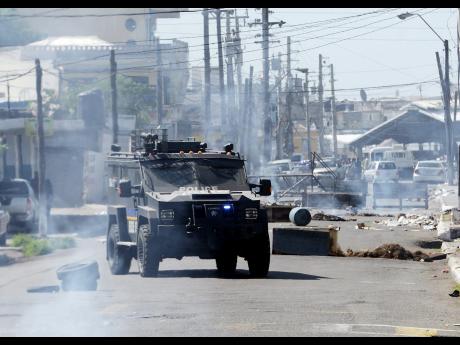 Ricardo Makyn
An armoured vehicle drives past debris in the vicinity of Tivoli Gardens in west Kingston, where residents blocked a section of Spanish Town Road after 19-year-old Tevin Gordon was allegedly shot dead by the police yesterday.

Memories of the deadly 2010 joint operation by the security forces came crashing back into the minds of West Kingston residents yesterday as gunmen and the security forces engaged in a heated shoot-out following the mid-morning killing of 19-year-old Tevin Gordon, a Tivoli Gardens resident.

Relatives said Gordon was at home on the third floor of Building 12 with his aunt and his six-year-old nephew when policemen knocked on their door and asked to be let in at about 7 a.m.

They said that Tevin was awakened by the officers' knock and he met them in the hallway. He was taken back to his room, which was searched, and the officers made enquiries about a small portion of marijuana found there. That's when Livingston said she became curious.

"I asked the police if this is the only house they searched and they said 'No, we search other houses come straight up'," cried Gordon's aunt, Natalie Livingston, detailing the last moments of her nephew's life.

"Same time, I go outside go ask my neighbour if they search their house, too, and by the time I do that is pure gunshot I hear, and I see my little son a bolt out of the house crying that them shot Tevin," she sobbed.

Except for the blooded boot prints from the small room through the house and down the stairs. Tevin's room did not appear ransacked yesterday.

More than an hour after the incident, and with the room severely tampered with by curious onlookers, the Independent Commission of Investigations (INDECOM) had not arrived on the scene.

The explosions reportedly alerted other residents, who awoke to see the officers hauling Gordon's lifeless body down the stairs.

That's when the tongue lashing started, stones began to hurl, and gunmen started firing at the police.

High-powered rifles rang out from that section of the community, where residents, who were still cursing crouching policemen nearby, and the police themselves, scampered to and from the sides of the buildings for cover.

Braver residents captured the event on video with their cell phones, and a photograph of a young man aiming an assault rifle in the community surfaced on the Internet in the afternoon.

Yesterday, West Kingston Member of Parliament Desmond McKenzie said the incident threatened the gains the police have made in recent months.

"We had a gospel concert the other night and the commissioner commended the area about how the people are working with the community, and less than a week after, you come and create an incident now," he said.

Yesterday, senior police officers on the scene promised that justice would be served if the officers had acted inappropriately.

Mayhem on the ZOSO doorsteps - Denham Town residents in danger once they venture outside the zonehe zone
Traumatised - Hurt by 2010 incursion, youngsters now behind west Kingston violence
‘I want my son!’ - Mother fears her missing child might be dead
TIVOLI APOLOGY - Holness to apologise in Parliament for deadly May 2010 operation
Hypertension levels soar in west Kingston