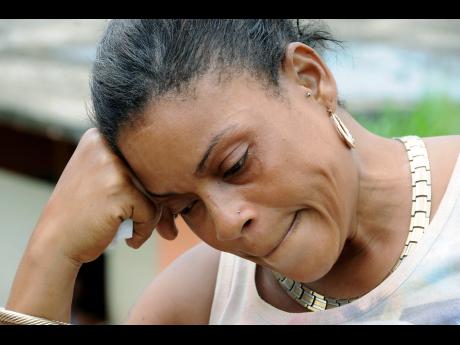 Jermaine Barnaby
Nadine Ricketts in grief as she reflects on the deaths of her husband, son and stepson in yesterday accident in the Bog Walk gorge. 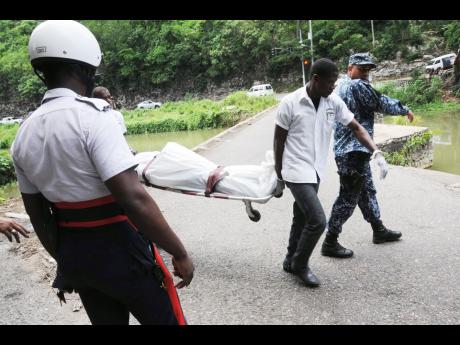 Jermaine Barnaby
Undertakers removing the body of one of the victims of yesterday motor-vehicle tragedy at Flat Bridge in St Catherine. 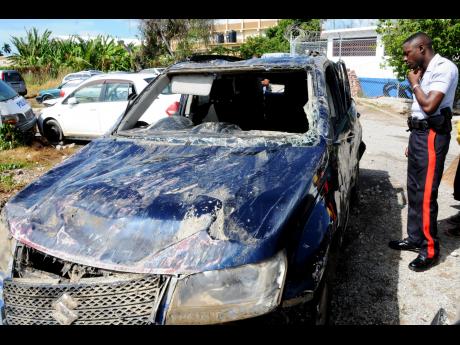 Jermaine Barnaby
A policeman looks at the vehicle in which eight persons were travelling when it careened into the Rio Cobre. 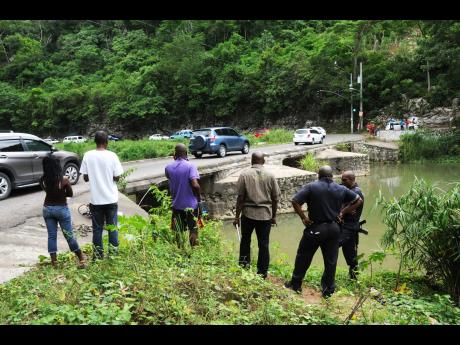 Jermaine Barnaby
Scores of persons gathered at the crash scene in the Bog Walk gorge yesterday.
1
2
3
4

Family members and friends had to hold Nadine Ricketts in their arms at her home in Commodore, St Catherine, yesterday as she struggled to deal with grief and despair, having received news that her husband, son and stepson had died after the vehicle they were travelling in ran off the Flat Bridge and plunged into the Rio Cobre.

Nadine’s husband Stephen, her son Chevorn and her stepson Shugay were among eight persons travelling in a Suzuki Vitara through the Bog Walk gorge when the driver lost control of the vehicle, which ran off the road into the river.

The other victims were identified as Benjamin Ellis, Shantel Morris and Oniel Morgan. Up to late yesterday, police sources were reporting that two of the eight passengers, Elfargo Slew, who was initially assumed to be among the victims, and a 19year-old survived the plunge.

Nadine, who managed to mutter only a few words when she spoke with our news team yesterday, said she was still in disbelief.

“My asthma has been up and down from morning. I didn’t even get to communicate with anybody because I was out when they left home. Mi really can’t believe what’s happening,” she muttered, her eyes looking at a distant vision no one else could see.

Shaquille Morrison, Nadine’s adopted son, was also in shock as he spoke with our news team. According to Morrison, it will be difficult to cope with the unfortunate incident.

“I was actually corresponding with them and they told me that they were leaving the function now and on their way home. Dis a more than death. It’s really sad,” said Morrison.

In the meantime, Norman Scott, mayor of Spanish Town, who visited the family, said he was saddened by the incident.

He urged motorists to be more vigilant while travelling on the nation’s roads.

“Last night I was up until late with some councillors and MPs (members of parliament) and I heard of the unfortunate incident. First, I must offer my condolences to the families and friends of the persons who lost their lives.

“I want to use this opportunity to remind individuals that the gorge is a very treacherous place and, therefore, persons using the roadway are to be very careful,” said Scott.

“For six persons to have gone this way, it is really a sad loss. Monday is our disaster meeting and I will be imploring the disaster coordinator to ensure that something tangible is done for divers who are called upon from time to time to volunteer their time and service in terms of rescuing and recovering, whenever there are any incidents of this nature,” added Scott.

Sgt Donovan Barnes, sub-officer in charge of traffic at the St Catherine North Division, said investigations into the cause of the accident are still ongoing.

According to Barnes: “The information we received was that the driver overtook a truck, the light was changing from amber to red, and he was trying to beat the red when he lost control of the vehicle and it went into the water.

“Persons were trying to assist but, unfortunately, lives were still lost,” added Barnes.

Yesterday’s incident was the second on the nation’s streets which left multiple fatalities in the past week.

There have been four road accidents with multiple fatalities in the last two months, with 19 persons losing their lives.

So far this year, 213 persons have died in motor vehicle mishaps.