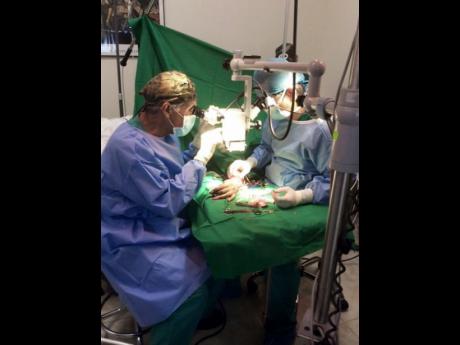 Contributed
Dr Cecil Aird (left) and Dr Toe Lwin attach the left hand of a 21-year-old of Petersfield, Westmoreland, after it was severed in an altercation last Saturday morning.

Doctors at the Carnegie Hand Institute in Montego Bay, St James, have successfully reattached the left hand of a pregnant 21-year-old of Petersfield, Westmoreland, after it was severed during a domestic dispute in the parish last Saturday morning.

The operation, led by renowned hand surgeon Dr Cecil Aird, lasted 10 hours and was done at no cost to James, a vendor.

"Reattaching a limb is a tedious operation; involving a lot of details, patience, and stamina. It's an operation that is very delicate and cannot be rushed," he explained.

Aird, who returned to Jamaica just over two years ago with the hope of passing on the knowledge he earned in North America, said one of the things he promised on his return was to help as many persons as possible, whether via charity or for payment.

He said a promise was made to public hospitals in the region, so when he received a call at approximately 2 p.m. last Saturday from Dr Alfred Dawes, senior medical officer (SMO) at Savanna-la-Mar Hospital, asking him to help the young woman, the natural answer was yes.

"It was a clean chop. The man who did it used a bill machete to chop straight through the wrist," Aird told The Gleaner, stating that he was assisted by the team of "Dr Toe Lwin, orthopaedic surgeon at Cornwall Regional Hospital (CRH), and his wife, Dr Moe Tha, an anaesthesiologist, who have worked with me on several cases".

Half way through the surgery, Aird said they were running out of some of the material needed to do the operation, but were rescued by the CRH's Dr Delroy Fray.

According to Aird, it will take James at least a year to recover.

"She will need a lot of therapy, which, hopefully, she can get at the Savanna-la-Mar Hospital."

In terms of her eventual level of function in the hand, he said this would be a wait-and-see.

Aird said if James was a 61-year-old, he would not have recommended the reattachment.

James has since been admitted to the CRH, where she is recuperating.

The regional hospital does not have the equipment and the expertise in microsurgery to do such an operation, hence the opening of the Carnegie Hand Institute a year ago by Aird.

Speaking from her hospital bed, the 21-year-old patient said she went to her boyfriend's home to talk with him about her pregnancy, which they both agreed to abort.

"I decided against bringing the baby. I tell him I was going to do an abortion, which he agreed to originally, but when the time came for it to happen, he didn't want to pay the money, so I went to his house."

She said a fight started, she stabbed him twice, and the boyfriend's cousin handed him a bill machete which he used to chop off her hand.

After her hand was chopped off, James said she ran after her boyfriend, and it was only after she was alerted by a man that she should take up her limp, wrap it up and take it to the hospital that she did.

Domestic violence is a serious setback in this country, said Aird. "We have to learn how to argue without being so violent."