Portia: Dissidents won't get away with it 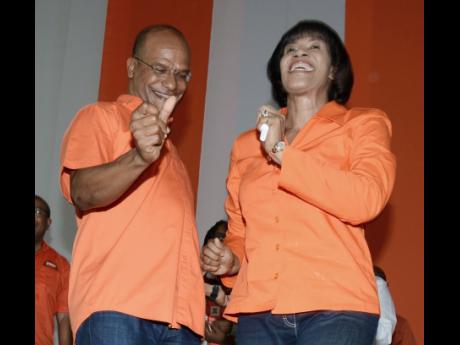 A fiery People's National Party (PNP) President Portia Simpson Miller yesterday threatened Comrades who bring the party into disrepute by taking its business in the public domain, telling the conference of the party's Women's Movement that "no one will get away with it" under her leadership.

Before launching into a broadside against dissidents, Simpson Miller described the Women's Movement as the "conscience ... the engine and the heart of the PNP".

"You have been the wings of the party in good times, and you have been its rock and stable anchor in rough times. For that I want to hail in a special way the women of the PNP ... ," said Simpson Miller as she stood at the podium of the PNP Women's Movement conference at the University of the West Indies' Assembly Hall in St Andrew.

With Women's Movement President Jennifer Edwards moments earlier pledging continued support for Simpson Miller, the latter declared that many of those publicly calling for renewal had no regard for individuals who had given their whole lives to the PNP.

"... Renewal was not about discarding people who have given their life to the movement. It is not about throwing out our party's elders and stalwarts. Renewal must involve looking at where we went wrong and correcting the problems. In all of this, we must put the interest of the party and our country ahead of our personal ambition ... ," said Simpson Miller in her address.

Taking a swipe at dissenters, she added: "Renewal is harnessing the best of our Comrades, old and young, to propel our party forward, and to contribute to Jamaica's growth and development. I have always supported renewal. In fact, many of the loudest voices for renewal were brought in by me. I will not allow the PNP to be destroyed by those who have not taken the time to learn its best traditions and principles."

Said Simpson Miller: "I have given more than 40 years of service to this noble movement, and I will never lie down or sit back and allow this noble movement to be destroyed at any time. I will never support those who continue to bring the party into disrepute by taking our business into the public space. PNP business usually resided within the walls of the PNP ... ."

The party's president then issued her threat, but did not disclose what the punishment would be.

"From Norman Manley to Michael Manley to P.J. Patterson, nobody is going to get away with it now under Portia Simpson Miller's leadership," she declared.

Peter Bunting, the party's spokesman on national security, has indicated that he will be contesting for the leadership of the party in September. He also addressed the conference, praising them for their continued support of the party.

The applause for Bunting was louder than that for Simpson Miller.