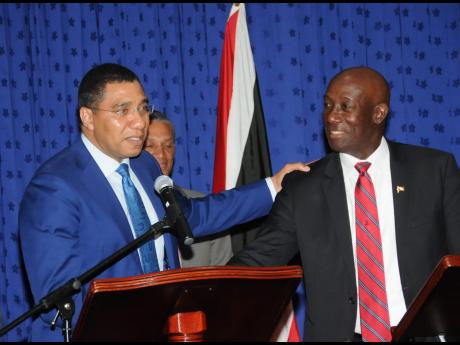 The Mona campus of the University of the West Indies (UWI) is facing embarrassment surrounding this week's planned induction of Dr Keith Rowley, prime minister of Trinidad and Tobago, into its honour park.

The university established the park in 2005 to honour past students who are sitting or former heads of government and have their names engraved on a monument.

The Office of the Prime Minister has announced that Rowley's induction is to take place on Wednesday morning.

However, it is the absence of the name of Jamaica's prime minister, Andrew Holness, 43, that could leave the 68-year-old regional institution embarrassed.

Holness, a past student of the UWI, is now in his second stint as prime minister. He served first as head of government for the period October 23, 2011 to January 5, 2012, following the resignation of Bruce Golding.

He started his second premiership when he was sworn in on March 3, days after leading the Jamaica Labour Party to victory in the general election in February.

The university, in response to a Gleaner query about the absence of Holness' name, explained yesterday that when the park was established in 2005, it was decided to induct all graduates who were prime ministers up to that time, and for the future, while they were in office.

The university, however, did not say why Holness was not honoured almost four years after his first stint in office, with no guarantee he would have become head of government for a second time.

"It (the university) has not yet inducted the current prime minister of Jamaica, Hon Andrew Holness. Initial overtures were made when he first served as head of government (October 2011 to January 2012). However, he demitted office before a ceremony could be held," read the statement sent to The Gleaner by Dr Carroll Edwards, director, marketing, recruitment and communications at the UWI, Mona.

"Arrangements are being put in place to induct Prime Minister Holness at an early date which is convenient for him and his office," it added.

According to the statement, in honouring non-Jamaicans, "It was decided that induction ceremonies would be held at a convenient time, preferably during an official visit to Jamaica."

Meanwhile, protocol consultant Merrick Needham said the university should have considered inducting Holness, especially because his first premiership was almost five years ago.

"If they (UWI) are thinking of the Trinidad and Tobago prime minister at the moment, and reasonable enough, given his (Rowley's) visit here, it would have been rather thoughtful if they had thought of having a double ceremony inducting both prime ministers at the same ceremony," Needham told The Gleaner.

Rowley obtained a first degree in geology from the Mona campus - where he also graduated with a doctorate in geology.

Holness, who is listed on the UWI, Mona, website among "famous alumni", has a Master of Science degree in development studies and a Bachelor of Science in management studies.

Rowley, who was elected prime minister last September, is in Jamaica on the invitation of Holness and is due to end his first official visit to the island on Thursday.