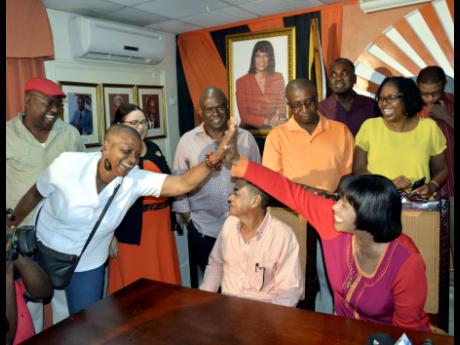 Opposition leader Portia Simpson Miller seems set to remain president of the People's National Party (PNP), after being nominated as the only contender for the party's top job at the PNP's Old Hope Road headquarters yesterday.

Leading up to the nomination period, Member of Parliament for Central Manchester Peter Bunting was seen as one of the main challengers for the party presidency. He eventually stated his intention not to enter the race at this time and issued a warning to his fellow Comrades not to mistake a "tactical pause for a retreat".

He explained to those attending the annual PNP Central Manchester conference on Sunday that the officers of the party had asked potential aspirants not to consider a September conference challenge, as it would prove distracting to the imminent local government elections.

"... The single time we've had a challenge, it has deeply fractured the party, so even though it's a constitutional right, certain rights you must exercise judiciously. I want to make it clear, I am not into any nominating for any presidency in September. However, I don't want you to mistake a tactical pause for a retreat. I will continue engaging the party leaders and the public ... . I will use the time to listen to their issues, to help develop new policy ideas, and construct a movement for rebuilding the People's National Party," Bunting said.

"There are differing expectations as to the timing and direction of this rebuilding process, but what is common is the desire to proceed respectfully and without damage to the party. Since declaring that I intend to throw my hat in the ring for leadership at the appropriate time, many Comrades have come forward in support. Some have even suggested that I contest this September. I listened carefully to everybody, but we must understand that in politics, timing is critical," he said.

The upbeat Simpson Miller expressed joy at the number of Comrades who turned out to show their support for her yesterday. To party members, especially young Comrades, her advice was to "stay close to the experienced ones".

"Comrades, I want to thank you. I thought I was coming for a quiet signing. For another time, I am demonstrating to Jamaica and Jamaicans, to young women and the young men of this country, that they can rise to any position they set themselves. They can achieve much.

"I want to say to the younger ones, pay close attention to the leaders of this noble movement, because not long from now, some of you will have to rise and accept the challenge of leadership. I want to encourage the young ones to stay close to the experienced ones, because experience teaches wisdom. If you stay close to us, when it is your time, you will not make errors; you will know exactly what to do," Simpson Miller said.

Answering questions from the media regarding political leaders in other jurisdictions who have stepped down upon defeat in elections, she stated, "I am Jamaican and I follow the rules of the People's National Party. I do not like to copy others. The fact is that this is a democratic organisation and I am not afraid of challenges."

Simpson Miller only required to have 12 party members' signatures for nomination. She received 22.