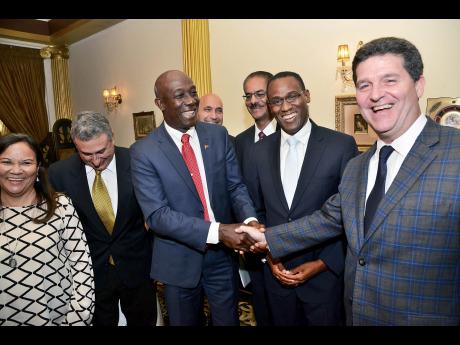 It was a subdued mood that characterised the tiny room at the Terra Nova All Suite Hotel in Kingston where private-sector interests yesterday hosted Trinidad and Tobago Prime Minister Keith Rowley, who is in Jamaica to address trade and immigration concerns that have been placed on the front burner by business leaders.

The stridency with which Jamaican private-sector leaders attacked the twin-island republic in the past, for what they say were less-than-fair trade practices with local businesses, was replaced with smiles.

President of the Jamaica Manufacturers' Association, Metry Seaga, had no more fighting words as he heaped platitudes on the T&T leader.

"I would like to thank you for stepping down the wicket and for coming here today. Coming to Jamaica is an important step. I think that we all know the problems, we all share the same problems, they are not new problems, they have been around with us for a long time. If you are committed, we will be committed, and I know I speak for the entire private sector when I say that we are committed to working together," he said, while addressing Rowley, whose five-day visit here ends tomorrow.

"It is truly an honour and pleasure to have you here, and I don't know that this is the lion's den, and if you have to worry if you put your head in the lion's mouth, what may happen. That's something you don't have to worry about," he said in rebutting a characterisation, of the PSOJ as a lion's den, proffered by Ambassador Nigel Clarke, who hosted the meeting.

Mahfood further distanced himself from the tough talks on trade relations between Trinidad and Jamaica.

He elicited genuine laughter from the audience when he said, "I know some of my comments in the past may have been taken out of context. The media have a way of doing that. I even had a friend call me from Trinidad to say they are likening me to Donald Trump, so let me just say that I have a lot of friends in Trinidad, I love Trinidad, and I have no intention of asking Trinidad to build a wall around Jamaica."

The Gleaner recently quoted Mahfood as saying that Jamaica, for many years, had been the ATM for Trinidad. "What exists now in CARICOM is a one-way street. We have an influx of goods coming from Trinidad. Trinidad, at this point in time, is the only beneficiary of CARICOM," he had said.

Rowley said during a bilateral meeting at Jamaica House on Monday, "We see CARICOM as our market and we want you to see Trinidad as your market, because what we need to do to realise our potential is to maximise this little market of ours."

Yesterday, Mahfood, in delivering his remarks, noted that the statements made by Rowley echoed the sentiments of the Jamaican business community.

"The time has come for us to understand that, once and for all, united we are stronger than individual. But the role that each of us has to play, and the two countries have that role to play, is to ensure the future of CARICOM as a united group," he said.