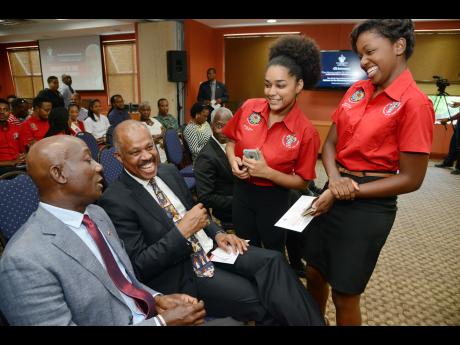 Dr Keith Rowley, the prime minister of Trinidad and Tobago, says that he is leaving Jamaica today "confident" that his visit has helped to avert a "trade war" between his country and Jamaica.

He made the declaration in an address yesterday at the St Andrew-based Regional Headquarters of the University of the West Indies.

Rowley, who has been on a five-day official visit, said he was leaving Jamaica "confident that whatever flickered will not turn into a flame" because of the positive interaction with the Jamaican sector leaders throughout his visit.

"The week I spent here, I have not met one person - young or old, male or female, high station or low - who has said to me or implied to me that we are not better off together and that we are not brothers and sisters in this region."

Jamaican businesses had complained and even threatened boycotts, alleging unfair trade practices by their counterparts in Trinidad and Tobago.

The relationship between Kingston and Port-of-Spain had also been strained by alleged mistreatment of Jamaicans by Trinidadian immigration authorities.

Asserting that "all a wi (CARICOM countries) a family", Rowley said Jamaica and Trinidad and Tobago were the leaders of the Caribbean and they should demonstrate leadership by resolving their issues.

"Whatever the challenges we face with our relations, it means that what is required of us as leaders [is] that we just have to identify the challenges and just work it out," he said.

Rowley, who became prime minister in September of last year, and Jamaica's Prime Minister Andrew Holness, who became head of government in March, are to sign a cooperation agreement before his departure today.