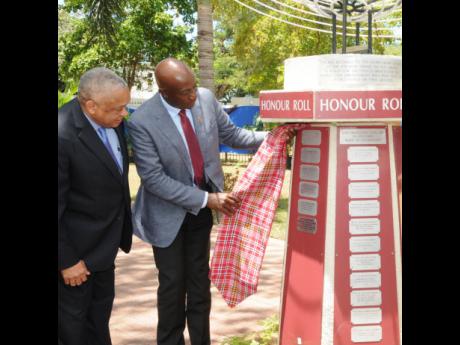 The Mona campus of the University of the West Indies (UWI) has indicated that it will induct Jamaica's Prime Minister Andrew Holness into its honour park by the end of this year.

The development follows The Gleaner's disclosure yesterday that Holness, a past student, has not been inducted despite being prime minister on two occasions.

The university uses the honour park to celebrate past students who were or are heads of government.

Trinidad and Tobago Prime Minister Dr Keith Rowley, who is on a visit to Jamaica on Holness' invitation, was inducted yesterday morning.

UWI Mona principal, Professor Archibald McDonald, told the gathering that he was looking forward to another ceremony by the end of this calendar year.

He also hailed Holness as a "most distinguished UWI graduate".

Rowley's induction has been marred by the disclosure that Holness, who first served as head of government from October 2011 to January 2012, has not been inducted.

NO EXPLANATION FOR EXCLUSION

The university has not explained why it has taken so long, especially since it did not know that Holness would have returned as prime minister almost five years later.

Meanwhile, UWI Vice Chancellor Professor Sir Hilary Beckles said he did not comment on the issue when he saw Holness at an event Tuesday night except to give him a "big hug".

Rowley and Holness have two degrees each from the UWI, Mona.

Holness was not present at the ceremony.

Seventeen heads of government now have their names on a monument in the park.