Enough! - Too much stupidity causing carnage on our roads 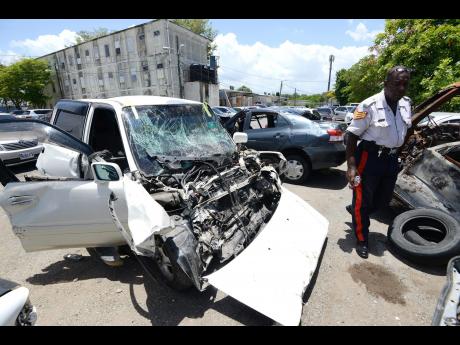 Ricardo Makyn
A policeman walks by the Honda CRV Sergeant Dillon Davis was driving when it was hit by an oncoming Toyota Yaris on the Dyke Road, Portmore, yesterday. 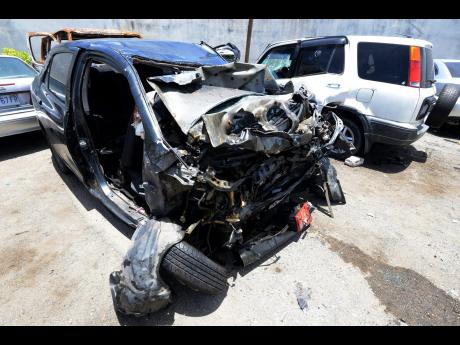 Angry at the carnage happening on the roads, in which several accidents have each resulted in multiple fatalities, Jamaicans are being urged to take collective responsibility to put an end to the madness.

"Enough is enough. We cannot continue like this. We all as a population need to be part of the solution, and not rely on Government, the police, or anyone else, for that matter, to tell us to do the right thing. We have to do better because we know better," a very passionate Dr Parris Lyew-Ayee Jr, director of Mona Geoinformatics Institute, at the University of the West Indies, told The Gleaner yesterday.

"You cannot legislate stupidity and we all see stupidity happening on the road every single day. The answer lies within ourselves, not with some third party, not with building a new bridge. In fact, you build a new bridge and people will find a new way to kill themselves."

He continued, "Whether you are the driver or the passenger or a pedestrian, you need to play your part. We need to be engaged, we need to push each other into doing the right thing. We each must take responsibility in order to put a stop to it. Not as a response, but as an engagement. It is about changing the behaviour pattern of the individuals, us as a people and how we operate on the road."

Yesterday's early-morning crash in Portmore, St Catherine, that resulted in the death of four persons brings road fatalities in Jamaica to 219 since the start of the year, nine more than the 210 persons who died in road accidents for the same period last year.

In fact, in the last two months, there have been five major road accidents with at least three fatalities.

Prime Minister Andrew Holness expressed deep concern that more than 200 persons have died in road crashes since the start of the year and appealed to road users to take special care as they use thoroughfares.

"Drivers, passengers, motorcyclists and pedestrians - slow down. Observe the rules of the road, be courteous, drive defensively, be considerate, buckle up and wear a helmet," the prime minister urged.

A heartbroken Dr Lucien Jones, vice-chairman of the National Road Safety Council (NRSC), called on "the political will to stop this, and stop it now. There are things that the Government have to do and there are things that we as a nation have to do. We need to pass the long overdue Road Traffic Bill very quickly because there are a number of things in there that will help. It won't be a magic bullet, because people will die on the road from time to time, but we need the political will to act swiftly and decisively."

He said the implementation of the new act will trigger a number of important factors, among them increased fines for repeat road offenders "that will put a dent in their pockets", automatic suspension of licence for exceeding demerit points, a new model for driver training, heavy fines for using a cell phone or texting while driving, plus a host of other measures.

"We also need electronic surveillance at certain strategic spots across the island," Jones added, while calling on the Government to increase the resources to the NRSC for a more ongoing, sustained public education campaign "to change people's behaviour on the roads".

In the meantime, Dr Lyew-Ayee is calling for an aggressive Not Cool campaign to force and shame drivers into being responsible and considerate road users.

He went on: "We don't need the police or legislation to tell us to do the right thing, we just need to do it. We need the passengers to tell the driver to stop driving so reckless or let me out. We need the big sister walking on the street with her little brother to tell him to stop playing in the road. Don't be afraid to tell the driver to use the indicator if he is going to turn, or to stop at the stop sign or not to park there, or to buckle your seat belt. You are not cool to be reckless and you are not a coward to complain about it."